What does autosexual mean?

Where does autosexual come from? 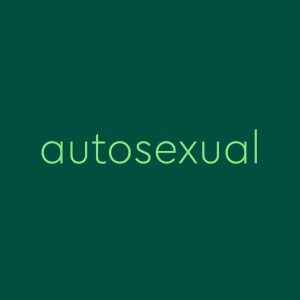 In 2016–17, some popular publications notably began discussing the topic of autosexuality in terms of experiencing greater arousal from images of or stimulation by oneself than they do from others, including mental fantasies and in front of mirrors. This sense of autosexual is found online in the late 1990s.

In April 2017, writer Ghia Vitale published a piece on Medium describing her sexual and romantic orientation as autosexual and autoromantic, experiencing a relationship with herself and preferring it over any others.

In clinical contexts, autosexual generally refers to sexual self-stimulation, especially when one doesn’t experience the same degree or intensity of arousal from others. Some people identify their sexual orientation as autosexual while others more playfully use the term to note when they are feeling sexy or feeling jaded by relationships.

Its decided. I am officially autosexual. I only love myself bye

It can similarly be used for playful self-compliments, self-empowerment.

While driving in tight jeans today I looked down at my thighs & got turned on. Never dull to be me 😋😂 #autosexual

Some online references to autosexual are critical of it as a sexual identity, mocking it a form of narcissism.

Hey everyone, I want to let 381 of you know some news. I Ellie, am, finally, coming out as autosexual. I am also in a relationship with a 2008 Toyota Sienna parked outside Sandburg, will the owner plz contact me. Thank you to all Cars and people who have supported me! Beep! Beep!

This is not meant to be a formal definition of autosexual like most terms we define on Dictionary.com, but is rather an informal word summary that hopefully touches upon the key aspects of the meaning and usage of autosexual that will help our users expand their word mastery.