Where does quoisexual come from?

Quoisexual is based on the French quoi, a word for “what,” as in the expression je ne sais quoi. It is credited to the user epocryphal in 2014 on Tumblr, a social media site known for its gender and sexual diversity. 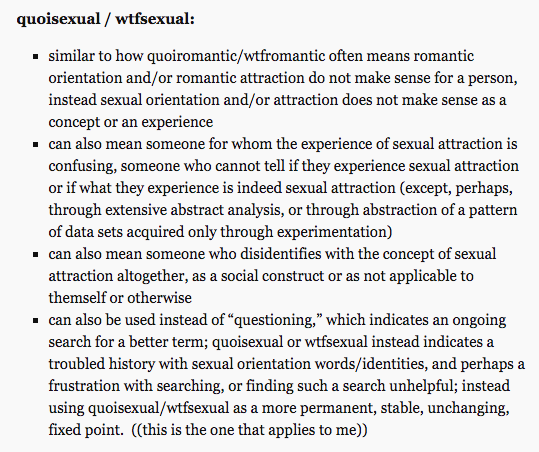 As epocryphal defined quoisexual: “sexual orientation and/or attraction does not make sense as a concept or an experience.” Epocrpyhal is also credited with coining quoiromantic and quoigender, in which the concepts and experience of romantic attraction and gender, respectively, don’t make sense to a person.

Quoisexual became more nuanced in meaning, expanding to a sense of confusion over feeling sexual feelings and the struggle to identify an appropriate sexuality. Quoisexuality falls in the asexuality or grey-A spectrums.

As with other terms in the expanding lexicon of gender and sexuality, the term quoisexual spread from Tumblr to the broader internet, including Twitter, in the late 2010s. It resonated with many people who couldn’t define exactly how they felt about their sexual orientation.

20 mins left of #NationalComingOutDay so
I'm quoiromantic/quoisexual and over the moon for finally having something to describe how I feel.

Quoisexual was notably featured by the MOGAI (Marginalized Orientations, Gender identities, And Intersex) Tumblr in 2015. It was added to Urban Dictionary in 2018. It has been humorously nicknamed WTFsexual, from the internet acronym WTF, or what the fuck.

being quoisexual is not fun bc you cant always tell the difference between a squish and a crush and it can get v annoying
@RadicalSkeleton, February 2016
I may not be appressexual but, I feel you really. I guess it's 'cause I do feel sexual attraction but, defining my orientation and understanding what was what was really a work to pick it apart. it's such a relief to finally feel comfortable with an answer to the question - I was hesitant to go with grey because I felt pressured to "know for sure" and quoi/grey both seemed like "labels for people who are questioning" especially in the environment I was in. people weren't satisfied with a middle ground.
cute kitty Meow! Mewo! (user) , Arocalypse (forum), November 2017

The venues of discussion for quoisexual have been in the asexuality community on Tumblr, Twitter, and other social media forums.

The term has support in this community given especially because it is flexible and inclusive, extending to people who are questioning their experiences.

Quoi– has become a prefix signifying “not making sense of” or “not relating to” gender or sexual identity, as we saw in quoiromantic and quoigender. Quoisexual is also sometimes shortened to quoi, cf. bi for bisexual.

This is not meant to be a formal definition of quoisexual like most terms we define on Dictionary.com, but is rather an informal word summary that hopefully touches upon the key aspects of the meaning and usage of quoisexual that will help our users expand their word mastery.