What does gay adjacent mean?

Gay adjacent can describe a straight person who has interests or behaviors stereotyped as gay—very often meant in a good way, like not being a total slob or you sincerely dig Carly Rae Jespen. It can also refer to straight people who enjoy gay media and culture as well as support gay rights.

Where does gay adjacent come from? 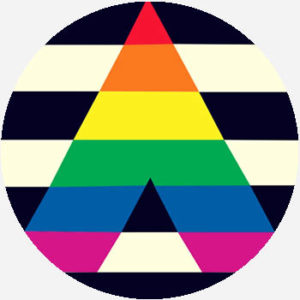 This term gay adjacent appears in print at least by a 1997 issue of the LGBTQ-interest magazine The Advocate. A review of the then-released film LA Confidential characterizes straight actors Russell Crowe, Guy Pearce, and since-out-of-the-closet Kevin Spacey as gay-adjacent because they had taken on gay roles in cinema.

Bet you didn’t know Russell Crowe played an adorable young gay man looking for love in the 1994 Australian dramedy The Sum of Us? Oh, you did? Well, in that case, we could cheer you on and say you’re gay adjacent.

Adjacent, here, means “next to” or “bordering on,” increasingly used with nouns in the late 1990s and 2000s to describe something as “almost” (e.g., hipster-adjacent millennials or vegan-adjacent cuisine).

The Advocate notably took to gay adjacent again in 2002, though expanded its meaning. In an interview with Steven Hill (the hunky bartender on The Real World who struggled to keep his top on while at work), writer Chuck Kim called him gay adjacent, implying Hill could attract more gay viewers to the show.

The term was mostly used by gay publications to refer to straight people who had some “brush” with gay culture until a 2005 broadcast of The Daily Show helped bring it to a wider audience. Correspondent Stephen Colbert responded to Christian fundamentalist, who claimed Hurricane Katrina was sent to punish gays, by noting New Orleans’ heart of gay culture, the French Quarter, was by and large spared: “The lesson of Katrina is: God loves gays, but hates the gay-adjacent.”

Straight allies and friends, so you're not left out:#gayadjacent
@marcandreyko, June, 2016

Charlotte Robinson, HuffPost (headline), June, 2012
sucked worse cuz i grew up on the west coast b4 moving 2 bible belt in HS, went 2 a homeschool program in middle school + a lotta my friend group were bi (1 turned out 2b nb), or 'gay adjacent' in that they had 2 deal w the gayness as a requisite 4 interacting w us.
@rocketboymoon, June, 2012
SEE MORE EXAMPLES

The sense and tone of gay adjacent depends entirely on context, so, if you’re a straight person trying to be woke, be mindful of audience and identity.

BuzzFeed playfully used gay adjacent in June 2018, for instance to describe popular songs, such as Britney Spear’s “Toxic,” that are “gay on the inside but straight on the outside” and have been “essentially appropriated by straight people.” This use, in part, ribs straight people who are eager to co-opt gay culture or overzealously prove they are gay community bona fides.

People in the LGBTQ may use gay adjacent to compliment “straight allies” who support LGBTQ rights and causes.

ATTENTION GAY (+gay adjacent) TWITTER: Would anyone be willing to record themselves doing their best Cher impersonation for a podcast thing?

People outside the LGBTQ community may use gay adjacent, conversely, to characterize straight people who show interest in things stereotypically seen as gay, such as certain kinds of music. This use often has positive intentions, but when used by straight people, often only serves to spread gay stereotypes.

This is not meant to be a formal definition of gay adjacent like most terms we define on Dictionary.com, but is rather an informal word summary that hopefully touches upon the key aspects of the meaning and usage of gay adjacent that will help our users expand their word mastery.