Autoromantic is a term for the experience of romantic attraction to oneself. Its sexual counterpart is autosexual.

Where does autoromantic come from? 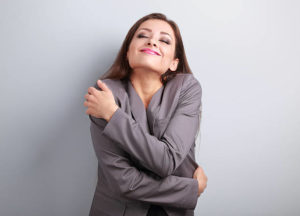 In discussions of sexuality and relationships, terms featuring -romantic are used to distinguish romantic attractions from sexual ones. For instance, an aromantic person experiences no romantic attraction to others, but that doesn’t necessarily mean they’re asexual (i.e., they don’t experience sexual attraction).

The term auto-romantic is first found in 1971, used then simply as a playful term for a car enthusiast. The term appears again on an internet Usenet group in 2003, that time as a bit of poetic wordplay.

Autoromantic—for someone who has a romantic relationship with oneself or prefers romantic feelings towards oneself more so than with others— notably appears on a forum on the Asexuality Visibility and Education Network (AVEN) in 2007.

"My autosexuality and autoromanticism don’t exist to fill a void. It’s complicated, I know, but as long as I let the lover in me prevail, I’ll be okay." @GhiaWasHere on being #autosexual or #autoromantic despite misconceptions – https://t.co/iBaCMzilbR

In April 2017, writer Ghia Vitale published a piece on Medium describing her sexual and romantic orientation as autosexual and autoromantic, experiencing a relationship with herself and preferring it over any others. Her piece  was discussed in some popular publications, such as Refinery29, greatly increasing autoromantic’s visibility.

Ghia Vitale, an autosexual and autoromantic who got engaged to herself in March 2017, is all set to tie the knot soon.https://t.co/ZgUSkptVQD

yahoo answers how can i become autoromantic i really want to love and accept myself :'((((
@riinkanei, June 2017
Autosexuality is one such identification that is seldom talked about. It’s the idea of being sexually attracted to yourself, and can also come with being autoromantic – experiencing the relationship with yourself as romantic.
Faima Bakar, Metro, March 2019
It should be noted that not all aromantic people or aromantic spectrum people fit into romance repulsed or romance indifferent categories, and that some may even enjoy romance in some aspects (such as when it comes to fictional characters, for example, or a grey-romantic who enjoys being in romantic relationships).
Aromantic Aardvark, Tumblr, August 2012
SEE MORE EXAMPLES

Some people identify their romantic orientation as autoromantic…

I wanna put out there a self discovery about the fluidity of my sexuality. I’d appreciate it if people kept an open mind, but you can interpret it any way you want. I’ve discovered that I’m autosexual/autoromantic. And what it means that you have an emotional or a sexual —

…while, as we see with autosexual, others more playfully use the term for self-love, especially when they’re feeling jaded by relationships.

I think I've found my perfect partner. Now I just need to find a way to clone myself. #autoromantic

Additionally, you’ll see the terms autosexual or autoromantic used by people who criticize the concepts as forms of simple narcissism.

I was trying to figure out if there was such thing as being autoromantic and then I, a self-obsessed psychology major, remembered the word "narcissism".

This is not meant to be a formal definition of autoromantic like most terms we define on Dictionary.com, but is rather an informal word summary that hopefully touches upon the key aspects of the meaning and usage of autoromantic that will help our users expand their word mastery.