Feedback
Previous "Concave" vs. "Convex": What's The Difference? Next From “5G” to “Zaddy”: Dictionary.com Adds Over 300 New Words And Definitions

Many people are raised to believe that gender and sex are the same thing, and that there are two options available to us: male or female. But neither sex nor gender is inherently binary—the belief that people must be classified into one of these two categories.

When something can’t be placed in two boxes, we call it nonbinary, meaning “not consisting of, indicating, or involving two.” And when it specifically comes to gender, nonbinary is a word that helps give voice to a diverse range of gender identities.

July 14th is International Nonbinary People’s Day, an occasion to celebrate the diversity of the many gender identities that exist beyond the binary. Whereas Transgender Day of Visibility or Transgender Day of Remembrance honors the transgender and nonbinary community as a whole, International Nonbinary People’s Day raises awareness for people with gender identities that aren’t necessarily male or female.

Discover more about the background and purpose of International Non-Binary People’s Day here.

What does nonbinary mean?

Nonbinary people have a gender identity that does not fit into the male/female binary. They are often included under the umbrella term of transgender, a community that refers to people whose gender identity does not correspond with their sex assigned at birth. While transgender and nonbinary people are often discussed as a group, there are many distinct genders within this group.

Nor are nonbinary people a monolithic group. Like transgender, nonbinary is also used as a general term, but there are many ways to identify outside the binary. There are those whose gender identity:

Absolutely! As our society begins to see gender beyond a two-label system, an increasing number of  young people are now identifying as nonbinary. One in four LGBTQ youth surveyed in The Trevor Project’s National Survey on LGBTQ Youth Mental Health identified outside of the gender binary, and youth surveyed used over 100 different words to describe their gender identity!

Young people are expanding language to describe and communicate the nuances of gender in exciting new ways, but many people are still trying to keep up with the new words that transgender and nonbinary people are using, and some people may wonder why we need so many labels.

While it may take a bit of time to learn them, these words aren’t frivolous. According to new research by The Trevor Project released during Pride month 2020, distinct differences in mental health outcomes exist among members of the transgender and nonbinary population. Language to describe gender isn’t just about describing how you relate to your identity. Labels also allow researchers to study specific identities and their outcomes, informing the policies and programs we create to support the transgender and nonbinary community.

Is nonbinary the same as transgender?

The short answer: it’s complicated. Because many of us are raised to believe the default, normative identity for a person is binary (male or female) and cisgender (having a gender identity that corresponds with one’s biological sex assigned at birth), it’s very easy and tempting for binary cisgender people to lump people who are not binary cisgender together.

Generally speaking, no matter what sex a person is assigned at birth, they can be:

Some people identify with a binary gender:

Some people identify with a nonbinary gender:

A nonbinary person identifies with a gender outside of “the male-female gender binary”—such as an agender person, whose identity is gender-neutral rather than specifically male or female.

Gender identity, or one’s internal understanding of one’s gender, is different from gender presentation, or how one’s gender is perceived and interpreted in the world. We shouldn’t assume what a person’s gender identity is based on whether they are presenting in a way that is interpreted as masculine or feminine (such as through clothing), or is perceived to be a specific gender due to secondary sex characteristics. There is no right way to be nonbinary, or to express it.

Why we need to support nonbinary people

When we talk generally about transgender and nonbinary people, we need to first make two things clear:

Our new research at The Trevor Project shows that transgender and nonbinary youth were 2 to 2.5 times as likely to seriously consider and attempt suicide compared to their cisgender peers within the LGBTQ community. Transgender and nonbinary youth also reported having been physically threatened or harmed at nearly twice the rate of LGBQ (lesbian, gay, bisexual, or queer) youth.

These outcomes are heartbreaking and reveal how much transgender and nonbinary youth need to be protected within our communities. We want to make it abundantly clear: trans rights are human rights! Nonbinary people do exist and deserve our acceptance and support, too.

Nonbinary vs. gender non-conforming vs. gender-variant

Nonbinary is sometimes used as an umbrella term for all people whose gender isn’t strictly male or female, but it’s not the only label that people outside the binary identify with. Researchers historically used the term gender non-conforming (GNC) to refer to this group, but this was not as often used by people within the community to describe their gender. It fell out of popularity as it implied gender is something one must “conform” to. Umbrella terms such as gender-variant or gender-diverse people are also used, but over time, nonbinary has become the more common term.

The many and diverse words for nonbinary identities

Just because the term nonbinary is commonly applied to a group of people does not mean that everyone who may be classified outside the binary necessarily identifies with or prefers the term nonbinary. There are other identities that aren’t strictly binary that use different words or labels to more clearly express the nuances of that particular gender. Even though they are often included under the umbrella of nonbinary genders, these words to describe identity are not necessarily interchangeable or synonymous. Before labeling a person as nonbinary, it’s important to make sure that you know how that person identifies their gender before assuming which word they prefer to use to describe themselves.

Other gender identities may fluctuate between or identify their gender in masculine, feminine, or androgynous ways, without a fixed identity as a “man” or “woman.”

It’s also important to note that culture plays a role in how we identify gender. For example, Indian hijra and Samoan fa’afafine cultures recognize a “third gender.” The term two-spirit is also used by some modern Indigenous North Americans to describe Native people in their communities whose sexual, gender, or spiritual identity is not binary or heterosexual.

Take a closer look at the evolving language of gender identity and expression.

Nonbinary identities and the law

In some places in the United States, there is now legal recognition of genders besides male and female, such as introducing the letter X as a nonbinary or other gender marker on identification documents. For example, as of 2019 in the state of Oregon, any person can select X on their driver’s license or identification card without any requirements of proof of gender.

Intersex people have also fought legal battles to have their correct genders recognized on birth certificates, such as nonbinary intersex writer and activist Hida Viloria, who was able to change her birth certificate to “intersex” in New York in 2017. Intersex babies are born with any of several variations in sex characteristics including chromosomes, gonads, sex hormones, or genitals that do not fit the typical definitions for male or female bodies. Sex does not define gender, and intersex people may grow up to identify as male, female, nonbinary, or another gender identity.

How language matters for the nonbinary community

Based on the most recent findings from The Trevor Project, we can see that, while transgender and nonbinary people as a whole have higher rates of suicidality than their cisgender peers, there are differences between transgender and nonbinary people. Language for nonbinary identities allows us to observe where the nonbinary community may need additional support or attention, as well as to notice differences in outcomes depending on challenges relating to sex assignment at birth.

When describing a nonbinary identity, sex assigned at birth is sometimes used as a shorthand to describe one’s identity, e.g., if you were assigned female at birth (abbreviated as AFAB nonbinary) or if you were assigned male at birth (AMAB nonbinary). Since sex is not binary either, ideally future studies will also look at people assigned intersex at birth. Sex assignment should never be used to define a person’s gender, but it can provide researchers with information about differences in lived experiences based on perceived gender or healthcare challenges associated with one’s body or anatomy. 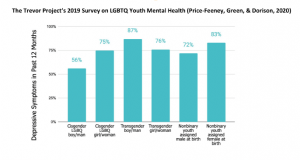 When we look at the results for symptoms of depression, we can see that cisgender LGBQ (lesbian, gay, bisexual, or queer) women and transgender women have similar outcomes—but disparities exist among trans men and AFAB nonbinary people.

However, it’s important to remember that there are a variety of struggles within the transgender and nonbinary community. We can’t simply say one gender identity has it worst across all outcomes, because the struggles of each gender identity measured here is different, intersectional, and complex. Language allows us to gather data to help understand these complexities. 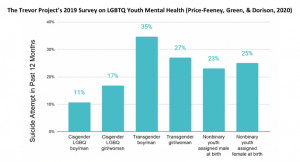 Data allows us to recognize our commonalities and our differences. By grounding our understanding of gender in research, rather than anecdotal evidence or stereotypes, we can work together to support the transgender and nonbinary people who are most vulnerable within our community.

How can we better understand and support the nonbinary community?

We all deserve language to self-define our gender and to communicate our gender to each other. Allies can show their support by educating themselves on gender identity, and adopting an attitude of curiosity rather than frustration or disapproval. Within the transgender community, we can support nonbinary people by appreciating our community’s diversity, and refraining from assuming that we all share the same experiences with gender.

And we can all support the nonbinary community by celebrating the evolution of language to describe gender beyond the binary, especially on International Nonbinary People’s Day. Gender is often an ongoing journey of self-discovery, and as a community, we’re still writing the narrative—including the language we use to tell the story.

Rory Gory (pronoun flexible) is the Digital Marketing Manager for The Trevor Project, the world’s largest suicide prevention and crisis intervention organization for LGBTQ young people. They are responsible for engaging The Trevor Project’s social media audience of over a million followers. Rory’s guidelines for messaging on the subjects of suicide, mental health, and identity have been used by Facebook, Capitol Records, and Netflix and their bylines include Teen Vogue, them., USA Today, and Dictionary.com.

Learn about how the letter "X" creates a more gender-neutral language.

Previous "Concave" vs. "Convex": What's The Difference? Next From “5G” to “Zaddy”: Dictionary.com Adds Over 300 New Words And Definitions
RELATED POSTS

Home / Trending Words / What Does The Term “Nonbinary” Really Mean?