What does 🦜 Parrot emoji mean?

The parrot emoji depicts the colorful bird in a rainbow of hues over different digital platforms. The parrot is always sitting, or perched, facing to the left, but it appears variously in deep reds, emerald greens, and teal blues, accented with metallic golds or sunny yellow.

It is usually used in posts about parrots, other tropical birds, and pirates.

Where does 🦜 Parrot emoji come from? 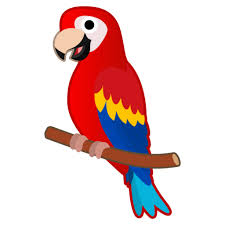 Not to be confused with the “party parrot”—an emoji created in the Slack app, around which an entire world called the “cult of the party parrot” revolves—the tame parrot emoji of the Unicode world only came about in 2018.

An especially annoyed Apple user posted this on an Apple forum, mistakenly assuming that the creation of emoji was up to Apple: “We need parrot emojis. You guys took our gun so it’s the least you could do. All I want it to be able to put a parrot emoji at the end of a text when I talk about my favorite pet.”

By the way, another word for parrot is psittacine, and they are among the most intelligent of birds, along with ravens, magpies, and and jays.

also a year ago today he brought this parrot home 🦜
@Captain_Carmen, November, 2018
Only a couple of days left. I will miss this view 💙🦜 Any recommendation on where to go next ?
@stagedives_, November, 2018
You’d think this bird has a hot date or something with as much as she preens🤣👏🦜
@GoldenGirlsRu, November, 2018
SEE MORE EXAMPLES

From pirates to tropical vacations and a love for pet parrots (?) … there are a lot of occasions for the parrot emoji!

Her name is Butterscotch 🦜 pic.twitter.com/i82TjhOO9S

A parrot is not a parakeet, but, hey, no judgment!

The best friend anyone could have , a parakeet 🦜 pic.twitter.com/z0rOaxJ6VN

Researched lots of tropical birds for this painting 💚🦜 pic.twitter.com/MIYhkGOv3b

Im dreaming im back in Cozumel Mexico soon took this picture in 2014 and a little photo edit magic 😎🌴🦜 pic.twitter.com/9tSgliltmb

@lizakoshy I feel this is a new comeback video idea. 😉🦜 P.S I Love You pic.twitter.com/cNmhhS1qMu

🦜Lovely idea for an Anti-Racism campaign from Niamh in 8S today! All colours are equal and beautiful!🦜 @Cansfield1 @HumanitiesCans1 pic.twitter.com/skkUUYW1VC

This is not meant to be a formal definition of 🦜 Parrot emoji like most terms we define on Dictionary.com, but is rather an informal word summary that hopefully touches upon the key aspects of the meaning and usage of 🦜 Parrot emoji that will help our users expand their word mastery.