What does Yoko mean?

From the Japanese artist and widow of John Lennon Yoko Ono, a Yoko is a disparaging term for a woman seen as controlling, a hanger-on who stifles her mate’s achievements and stirs up conflict. It’s based on a belief that Yoko Ono caused the breakup of the Beatles.

Where does Yoko come from? 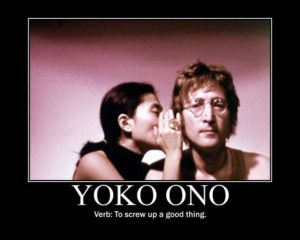 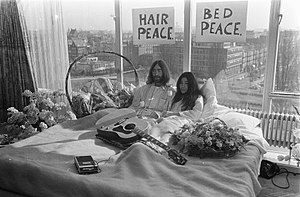 Yoko Ono is a Japanese artist and musician who became Beatles frontman John Lennon’s wife in 1969. While Lennon was a rock/pop artist, Yoko was part of the avant-garde New York Fluxus group. Her work was difficult, conceptual and, well, weird. Lennon’s newfound interest in exploring different, more experimental musical styles, along with his insistence that Yoko accompany him everywhere—including Beatles practices, recording sessions, and even the bathroom—is sometimes said to have exacerbated long-simmering tensions amongst the band, which finally broke up in 1970.

Many Beatles fans (and some in the media) blamed Yoko for the demise of the band, although Lennon’s counterpart Paul McCartney later said that Yoko wasn’t to blame. Since their breakup, though, Yoko has become a nasty thing to call a woman who dares to interrupt the status quo of her significant other’s male group, especially a band, because of her existence. One notable example targeted Courtney Love, who was characterized in the 1990–2000s as a Yoko despite having her own successful career and is still sometimes blamed for her husband and Nirvana leader Kurt Cobain’s suicide in 1994. 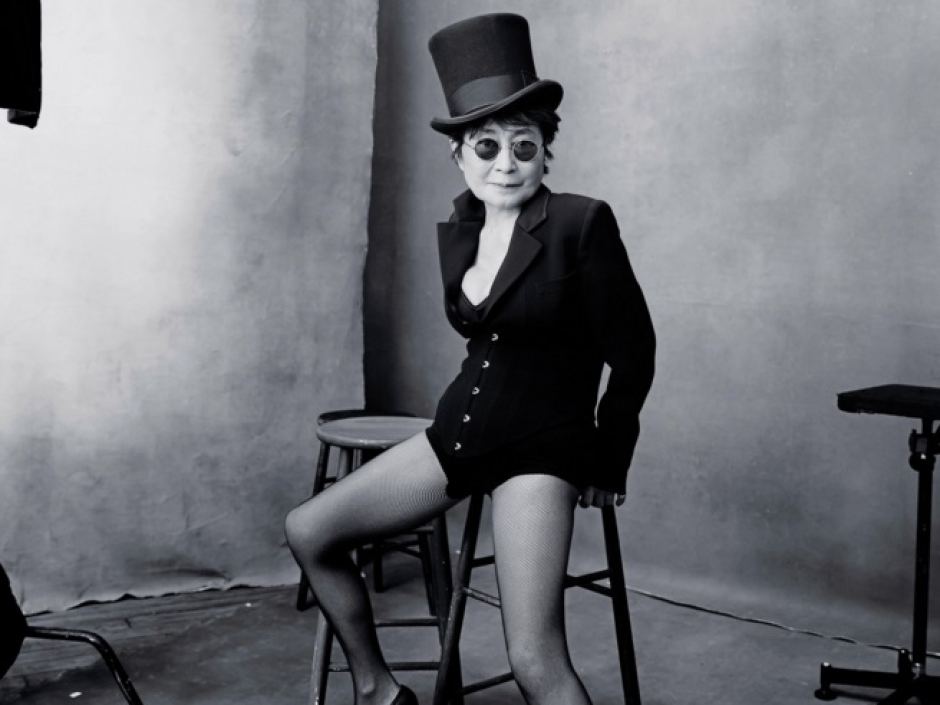 By the 2000s, public perception of Yoko had shifted from that of a band-wrecking harpy to an innovator, iconoclast, and badass elder-Bjork who brought offbeat performance art and screeching banshee vocals to the mainstream. In that sense, we should all try to be a little bit more of a Yoko. 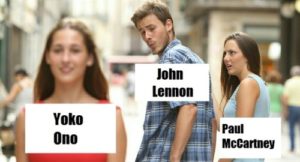 jokejive
Yoko Ono is going into the jungle to advise on bush tucker survival techniques Apparently she has managed to live off a Beatle for 30 years
@ShitJokes, November, 2016
you’re breaking up the band yoko!!!!!
@moonlightaffair, August 2018
SEE MORE EXAMPLES

Although Yoko was most famously used to describe Courtney Love, other celebrity girlfriends have been called Yoko in an unflattering light, including Jessica Simpson in 2007. Simpson was dating Dallas Cowboys quarterback Tony Romo at the time, and football fans blamed Simpson for his poor performance, dubbing her Yoko Romo.

In 2015, the Daily Mail reported One Direction fans called singer Perrie Edwards a Yoko Ono, blaming her for then-fiance Zayn Malik’s departure from the band. 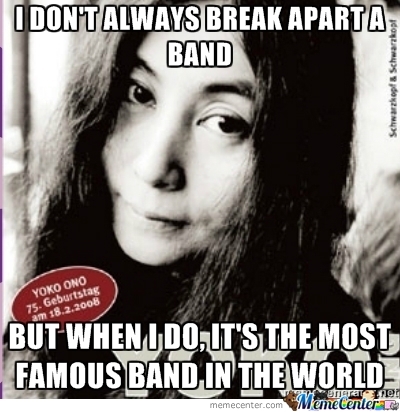 Yoko was the subject of many songs by John Lennon, of course, but other artists have also penned tunes inspired by her. There’s Public Enemy’s 1987 classic “Bring the Noise,” featuring the line “Beat is for Sonny Bono / beat is for Yoko Ono,” as well as Barenaked Ladies’ “Be My Yoko Ono” from 1992 and Dar Williams’ “I Won’t be Your Yoko Ono” from 2000. The NBC time travel adventure series Timeless also threw out a Yoko reference in the 2018 episode “Mrs. Sherlock Holmes.”

We recommend using Yoko to describe someone who is driven, complicated, offbeat, envelope-pushing, and not particularly concerned with being accessible or likable. The other use, the one that scapegoats a woman for the failings of four grown men who can’t get along, feels as dated as lava lamps, leisure suits, and other things that should just be left in the 1970s.

This is not meant to be a formal definition of Yoko like most terms we define on Dictionary.com, but is rather an informal word summary that hopefully touches upon the key aspects of the meaning and usage of Yoko that will help our users expand their word mastery.