What does Baphomet mean?

Baphomet is term that was originally associated with an idol that the Knights Templar were said to have worshipped. Later, Baphomet was incorporated into other occult traditions as a powerful figure, often depicted as a winged man with the head of a goat.

666, dance with the devil, come to Jesus, Trumpism

Where does Baphomet come from? 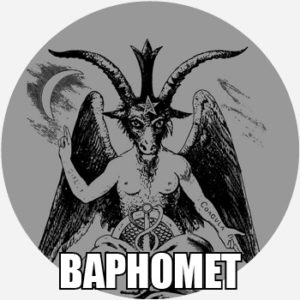 Baphomet has reportedly been in use since at least the 1090s, when it appeared in an early Crusader’s letter. The name itself, although certainly not its modern image, may have been connected with Islam, as chroniclers referred to mosques as Bafumarias. Some think Baphomet is a corruption of Mahomet, an alternate spelling of Muhammad, although many other cryptic origin theories have been provided.

Regardless of its specific origins, Baphomet got much more attention after the Knights Templar, a medieval Catholic military order, were interrogated under the Inquisition. Under torture, some admitted to worshipping a pagan idol named Baphomet. This figure didn’t have a consistent appearance or nature, and not all Templars admitted to worshipping it. It’s unclear whether Baphomet actually had anything to do with the Templars’ activities, whether it was an accusation the Church created to lend more weight to their other charges of heresy, or whether the admissions were simply tortured out of them.

Baphomet fell into relative obscurity for some time, but was reborn in 19th-century occult works, thanks especially to Eliphas Lévi. In the mid-1850s, Lévi published a picture of Baphomet in his book Dogmas and Rituals of High Magic. The illustration greatly inspired Baphomet’s current incarnation; it was a human-goat amalgamation referred to as the “Sabbatic Goat.” This depiction would go on to influence the iconic Rider-Waite tarot card image of the Devil. In some occult, mystical, or religious traditions, Baphomet is a deity that represents the sum of the entire universe and all its opposing forces. 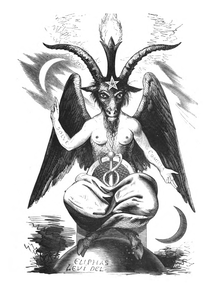 I promised to design a kawaii baphomet sticker once I reached 666 followers, now it's finally done!
@Plentyblush, March 26, 2017

Wikipedia
Just put a poster of Baphomet flanked various snakes, demons, and succubi (not to mention dead babies clutching hand grenades) around you while you work, and you will find yourself becoming a regular Norman Vincent Peale.
Tim Maroney, Google, August 17, 1989
SEE MORE EXAMPLES

Lévi’s work cemented Baphomet’s association with the occult, and depictions of Baphomet appeared in occult texts throughout the late 19th and early 20th centuries. It was fixed yet more when the Church of Satan adopted the figure, depicted in an inverted pentagram, as their official symbol in the late 1960s. A new sigil, a symbol considered to have magical powers, of Baphomet was created for the Satanic Bible, originally published in 1969 by Anton LaVey.

In 2014, Baphomet was brought again to both public consciousness and controversy when the Satanic Temple, a political organization promoting the separation of church and state, offered to donate a statue of Baphomet to stand alongside a monument to the Ten Commandments outside the Oklahoma Supreme Court. In 2015, a statue of the figure was unveiled, to much controversy, in front of Detroit’s Satanic Temple.

The Satanic Temple protested a Ten Commandments monument in Arkansas with its Baphomet statuehttps://t.co/b4mmAtq2nz

Due to its association with Satanism, Baphomet can be viewed as a demonic or subversive symbol, and thus stand in for something considered evil or deviant. It can also serve as an identifying marker for those aligned with the occult. However, many occultists view Baphomet not as demonic but as an idol or deity that harmonizes cosmic opposites, e.g., good and evil, man and woman. Additionally, people have gotten into the habit of juxtaposing Baphomet’s historically taboo image against contemporary pop culture for humorous effect.

The level of need I have is 666#baphomet #Satanic #dolls #Satanism #Funny pic.twitter.com/lTDT2BnFQv

This is not meant to be a formal definition of Baphomet like most terms we define on Dictionary.com, but is rather an informal word summary that hopefully touches upon the key aspects of the meaning and usage of Baphomet that will help our users expand their word mastery.