Who is Ash Ketchum?

Ash Ketchum is the main character of the media franchise Pokémon.

Where does Ash Ketchum come from? 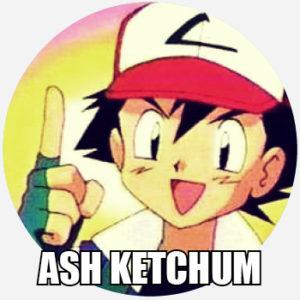 Pokémon is an anime series, based on a video game, which follows the journey of a young boy as he hunts down monsters and tames them in his quest to become the greatest monster trainer in the world. The young boy’s name is Ash Ketchum.

Or, at least, it is in English-language versions. In the original Japanese, his name was Satoshi, after the creator of Pokémon, Satoshi Tajiri. He based Ash/Satoshi on his childhood self; his early fascination with catching bugs inspired the premise of Pokémon.

When it was announced in 1998 that the Pokémon anime would be dubbed into English, the studio made the decision to translate his name into something that sounded more American. They picked Ketchum based on the motto of the Pokémon franchise, “Gotta catch ‘em all.” Ash is an Anglicized form of Satoshi. The popularity of the Pokémon anime has made Ash Ketchum a recognizable figure and name, further boosted with the release of Nintendo’s Pokémon GO mobile game in 2016.

In Magi having your hair loose is the equivalent of Ash Ketchum turning his hat backwards.You know something is about to go down when those locks are a-flyin'.
beamthechao, Tumblr, March 10, 2015 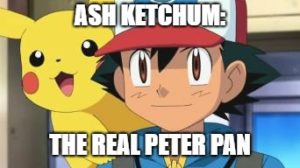 Imgflip
Can you imagine how disappointing it would be if Fulcrum was revealed to be Ahsoka, but she suffered Ash Ketchum syndrome and never aged a day?
Kentoa, Theforce, March 2, 2015
SEE MORE EXAMPLES

One notable feature about Ash Ketchum is that, despite being the protagonist of an anime that’s run for more than ten years, he never seems to age. He was about ten in the first season of the Pokémon anime, and continues to look ten in media produced by the franchise today. This perpetual youthfulness has given rise to the term Ash Ketchum syndrome, which describes characters who never seem to get older no matter how long their series goes on.

Ash Ketchum also wears a baseball cap that he turns backwards when he’s focusing. If something’s “like Ash Ketchum turning his hat backwards,” it means a character has shown an outward sign of their intense concentration or determination—and that something exciting is about to happen. By comparison, the character Violet in Lemony Snicket’s A Series of Unfortunate Events ties her hair up with a ribbon when she needs to think up new inventions. So, when Violet puts her hair up, it’s like Ash Ketchum turning his hat backwards.

This is not meant to be a formal definition of Ash Ketchum like most terms we define on Dictionary.com, but is rather an informal word summary that hopefully touches upon the key aspects of the meaning and usage of Ash Ketchum that will help our users expand their word mastery.