Amourshipping refers to fan theories, fiction, and art about a romantic relationship between the characters Ash and Serena in the anime series Pokémon.

Where does Amourshipping come from? 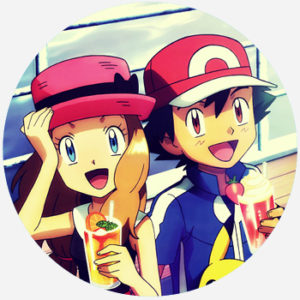 Amourshipping originates with Pokémon: XY, the 17th season of Pokémon, which follows the character Ash. This season introduced the character of Serena as a friend and traveling companion of Ash’s. Fans started speculating about their relationship when the show revealed Ash and Serena knew each other in childhood. The term Amourshipping emerged by September 2013, about a month before the first episode of Pokémon: XY aired in Japan, on an internet forum that explains: “AmourShipping is the name given to the belief of Ash…and Serena are or will be involved in a romantic relationship.”

The word Amourshipping is a blend of the French word amour, meaning “love,” and shipping. Amour was chosen because Ash and Serena travel through a region called Kalos, which is French-inspired. Shipping is a slang term in many fan communities for taking an emotional interest in the romantic relationship between two fictional characters or famous people. Amourshipping is also called SatoSere, blending the Japanese names of the two characters: Satoshi and Serena. Hopes and theories for Amourshipping came true for some fans when it’s suggested that Ash and Serena kiss goodbye in Serena’s last appearance on a 2016 episode of Pokémon: XY&Z.

I just watch amv or videos of Serena, Amourshipping or XY/XYZ pics or videos. I'm sad now. I really miss it and just want her back… pic.twitter.com/YBdKdHnT0B

As a term and activity, Amourshipping draws on many other instances of shipping in Pokémon fan lore, including Contestshipping, Advancedshipping, and one the of earliest, Pokéshipping, which imagines a relationship between Ash and a female lead character named Misty.

It's been 6 months since anime history has been made in the Pokemon universe. What a great ship. #amourshipping
@_TASOfficial_ , April, 2017 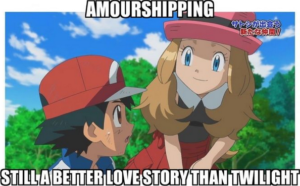 Know Your Meme
I love the interactions between Ash and Serena, especially when the Amourshipping moments are used for comedic relief and such.
Pokegirl Fan~, Serebiiforums, September, 2016
SEE MORE EXAMPLES

Fans of Amourshipping, who call themselves Amourshippers, often write fan fiction or create artwork inspired by the Ash-Serena relationship and discuss it online using the hashtag “#amourshipping.”

I'm still an Amourshipper, and I still have faith in these two. pic.twitter.com/Tzoy9Z6IHy

This is not meant to be a formal definition of Amourshipping like most terms we define on Dictionary.com, but is rather an informal word summary that hopefully touches upon the key aspects of the meaning and usage of Amourshipping that will help our users expand their word mastery.