What does polycule mean?

Where does polycule come from? 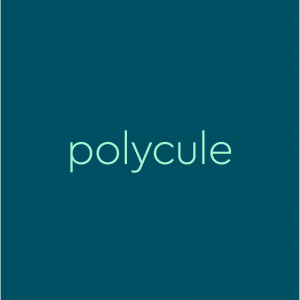 You’re right to think polycule sounds science-y. The word is a blend of poly- (meaning “many,” as in polyamorous, or simultaneously and consensually being in multiple serious romantic or sexual relationships) and molecule.

A polycule is a connected network of people in non-monogamous relationships. The term apparently likens such a network to a model of a chemical molecule, which uses lines, circular shapes, or symbols to indicate bonds between atoms. 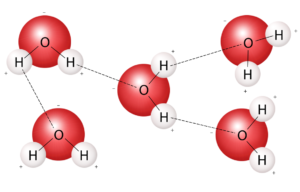 Polycules can take many different forms, such as a triad (three people in a relationship with each other) or a quad (four people). Polycule describe all of these relationships. 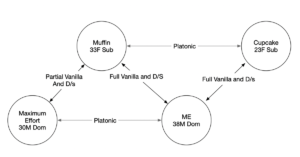 Evidence for the term polycule online dates back to at least 2007. It was widely embraced as a term in the early 2010s in the polyamorous community, spreading on personal blogs, social media sites like Reddit, and polyamory forums like polyamory.com.

Polycule received mainstream attention at the end of 2018, when actor Ezra Miller talked about being in a polycule during an interview with Playboy magazine.

Eventually all trans girl polycules will merge into one giant polycule, and then all trans girls will merge into a posthuman godlike being with extremely strong opinions on anime and flavours of ice cream
@vexwerewolf, July 2019
At the moment, Rob is the only member of our polycule currently dating two people. His other girlfriend had a girlfriend of her own when I came onto the scene, but they have since broken up. I’m not dating a second or third partner because I’m enough of an introvert that even one relationship exhausts me.
Rebecca Jane Stokes, HuffPost, August 2018 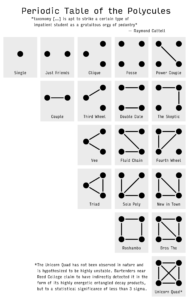 2nd base: the kinkiest sex you two will ever have

3rd base: comparing various traumas and aligning your political beliefs

Home run: introducing them to your polycule

Many people in the polyamory community may humorously liken existing groups to (or ship fictional characters into) polycules or joke about the complexities of being in one.

the sea horses are a polycule pic.twitter.com/6mYW6Q8VMr

Agreed. Having Rey and Kylo fall in love would just be lazy writing.

Now…Rey, Fin, and Poe forming a polycule, that I could get behind. https://t.co/fGSoZZ7OFS

In polyamorous communities online, it’s not uncommon to see diagrams explaining someone’s current polycule to others. 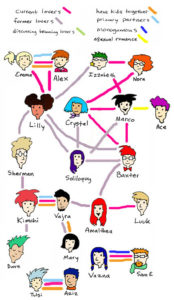 This is not meant to be a formal definition of polycule like most terms we define on Dictionary.com, but is rather an informal word summary that hopefully touches upon the key aspects of the meaning and usage of polycule that will help our users expand their word mastery.