What does 🐒 Monkey emoji mean?

Monkeys. They are mischievous, cute, and … cute. This monkey emoji reflects that, with a sweet countenance and curled tail, sitting as if perched on a tree branch.

What is she up to? Sometimes we ask questions here, and we don’t always have the answers! But that doesn’t stop people from using the monkey emoji in social-media posts that range from animal-driven topics to comments on mischievous personal behavior.

Where does 🐒 Monkey emoji come from? 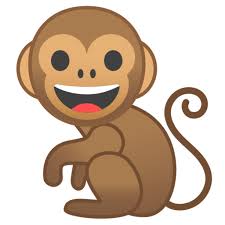 The friendly monkey emoji was approved as part of Unicode 6.0 in 2010 and added to Emoji 1.0 in 2015, the same time that other animals like pig, chicken, rabbit face, and rooster were added.

When the playful primate made its debut, chances are good that the idea was to release a whole menagerie of creatures into the emoji-sphere, because if you have one animal, you sort of need to have them all, don’t you?

What’s a lizard without a snake to keep him company? A gorilla without a monkey?

It’s hard not to love the monkey emoji. With zoo-related posts, nods to nature, mischievous messages, adorable kid pics, “monkey” word play, and more, the monkey emoji gets around … especially on social media.

What do you think is faster? Flying through the trees on Vampire, or zooming down the four person Zip Wire at Go Ape Chessington? 🎢🐒https://t.co/mpQJvzS23F pic.twitter.com/wK2onWdWaK

Who are you from Disney characters? Anna: a monkey from Aladdin. 😂😂😂🐒
She is funny.😀#AnnaPopplewell #mfc2018 pic.twitter.com/ljZXFCjOP9

Made a friend at monkey world 🐒 pic.twitter.com/yKOI5hBoZa

This is not meant to be a formal definition of 🐒 Monkey emoji like most terms we define on Dictionary.com, but is rather an informal word summary that hopefully touches upon the key aspects of the meaning and usage of 🐒 Monkey emoji that will help our users expand their word mastery.