Craftivism is the act of using craft projects as a form of protest or to advance social causes. The projects involved are most often knitting, crocheting, or other forms of needlework.

While the term dates back to the early 2000s and acts of it are much older, craftivism received mainstream attention in the late 2010s in protests against Donald Trump. Craftivism was also notable in 2020 in support of public health measures against COVID-19 and of Black Lives Matter.

Example: In an act of craftivism, a group covered the flag with a handmade blanket adorned with a peace sign.

Where does craftivism come from? 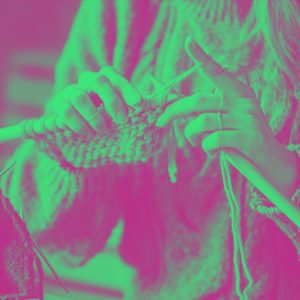 Craftivism is a blend of the words craft—as in arts and crafts and handicrafts like knitting—and activism. Performers of craftivism, called craftivists, will fashion items that are then used in political protests or in support of social causes.

For instance, craftivists might stitch quilts or banners that are then used at gathered protests or picket lines. Craftivists might engage in a form of street art known as yarn bombing, where large amounts of yarn and fabric are used to cover public objects or areas (e.g., light posts, fire hydrants) and nature (e.g., tree branches and trunks).

Despite the name, craftivism has also been used to help in causes that wouldn’t strictly be considered political activism. Some examples include craftivists knitting hats for patients with cancer or teaching prison inmates to craft so their creations can be sold to raise funds for charity.

The word craftivism has been credited to writer Betsy Greer, who created the website in Craftivism.com in 2003. Greer defines craftivism as “a way of looking at life where voicing opinions through creativity makes your voice stronger, your compassion deeper & your quest for justice more infinite.” She also defines it, less philosophically, as “the practice of engaged creativity, especially regarding political or social causes.” Greer wrote about craftivism in two books released in 2008 and 2014. Her second book, Craftivism: The Art of Craft and Activism, not only explained the theory behind craftivism but also profiled worldwide craftivists.

While craftivism had existed since the early 2000s—and the act itself is much older than the term, with the AIDS Quilt one prominent example—the term garnered mainstream attention in coverage of the 2017 Women’s March on Washington after the inauguration of Donald Trump. Women protestors notably created and wore pink knit hats, known as pussyhats, in a craftivist protests inspired in part by misogynistic remarks from Donald Trump.

One important component of craftivism is that it shows proof-of-work. A hand-stitched note to a legislator gets noticed. #rp14
@xor, May 7, 2014
Textiles endure as a popular means of stealth messaging: Craftivism (deploying craft into activism) is the subject of current projects at the National Gallery of Victoria and Shepparton Art Museum.
Chloe Wolifson, The Sydney Morning Herald, June 26, 2020

Craftivism is active around the world, and often associated with feminist, environmentalist, and other social justice causes.

Numerous groups have organized around craftivism, and Betsy Greer herself still promotes and engages in craftivism.

If anyone has a #craftivism project idea, concept or notion they'd like to discuss, I'd be happy to set up a Skype session to chat! (For free, of course!)

This is one of the only uses of glitter I condone. #craftivism

This is not meant to be a formal definition of craftivism like most terms we define on Dictionary.com, but is rather an informal word summary that hopefully touches upon the key aspects of the meaning and usage of craftivism that will help our users expand their word mastery.