or the Horus eye

What does Eye of Horus mean?

The Eye of Horus is an ancient Egyptian symbol of regeneration used in modern times as popular icon for the civilization and is sometimes associated with occult beliefs.

Where does Eye of Horus come from? 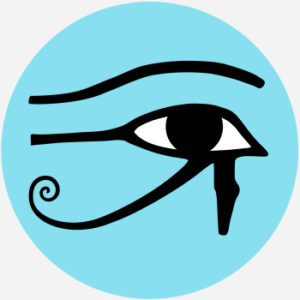 References to the Eye of Horus started to appear in English texts about ancient Egypt by at least the mid-1800s. In ancient Egyptian myth, Horus was a powerful sky god in the form of a falcon whose right eye was the sun and left eye was the moon. He lost his left eye in a fight with Seth, another god, who murdered Horus’s father, Osiris. In one version of the story, the goddess Hathor restored Horus’s eye, which Horus then offered to the slain Osiris, bringing him back to life.

Based on this myth, the Eye of Horus became a sacred symbol of regeneration, healing, protection, wholeness, and sacrifice in ancient Egypt. It was often fashioned into amulets to provide safety for wearers or carved into funerary monuments to offer the souls of the dead safe passage to the afterlife. The eye was also used for fractional calculations and as a hieroglyph.

As a symbol, the Eye of Horus features a prominent eyebrow and markings that some historians think were stylized after the actual eyes of falcons or hawks, Horus’s totemic birds. Amulets in the shape of the Eye of Horus date back to at least 3000 b.c. They were often crafted from a blue-green ceramic called faience and were sometimes called wedjat eyes, a word that may come from the Egyptian for “made whole,” which is fitting for the Horus eye.

The ancient Egyptian Eye of Ra, which some identify as Horus’s right eye, is closely related symbol in design and meaning.

In 21st century, the Eye of Horus has sometimes been mistaken as the Eye of Providence or the All-Seeing Eye, notably featured in the capstone of the pyramid on the back of US one-dollar bills. Some consider this eye a satanic symbol or connect it to Illuminati conspiracy theories.

Examples of Eye of Horus

that whole ONE EYE of HORUS thing goes back to ancient satanic Egypt, of course Freemasons, Catholics, Jews popularized it on Internet
@cybervoyager, April 2017
We love this handwoven brown scarf – shawl with Eye of Horus design
@neithtextiles, April, 2017
“[T]he Eye of Horus became the symbol of all sacrifices and thus became one of the holiest symbols of the ancient Egyptian religion. Throughout Egyptian literature the phrase ‘I give thee the Eye of Horus’ indicates the presentation of sacrifice.”
Albert M. Potts, The World’s Eye (2015)
SEE MORE EXAMPLES

Who uses Eye of Horus?

Outside of professional and hobbyist Egyptology, the Eye of Horus has inspired jewelry, tattoos, decorative designs, and cosmetic products. The term Eye of Horus is frequently used in reference to its distinctive shape. For example, a galaxy system discovered in 2016 was dubbed the Eye of Horus after its appearance. Some mystics identify the shape of the temporal lobe of the brain as the Eye of Horus, ascribing it the power of a third eye. Eye of Horus images are sometimes used as emblems for ancient Egyptian civilization in general.

This is not meant to be a formal definition of Eye of Horus like most terms we define on Dictionary.com, but is rather an informal word summary that hopefully touches upon the key aspects of the meaning and usage of Eye of Horus that will help our users expand their word mastery.