What does ouroboros mean?

The ouroboros is an ancient symbol of a snake or serpent eating its own tail, variously signifying infinity and the cycle of birth and death.

Where does ouroboros come from? 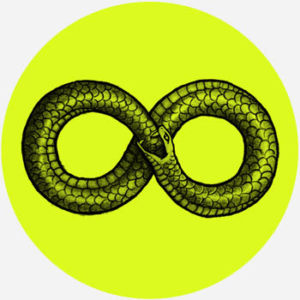 Ouroboros derives from a Greek word meaning “tail-devourer.” While the word is not attested in English until the 1940s, the concept of the ouroboros is very ancient, used across many cultures as a symbol of cosmic harmony, eternity, and the cycle of birth and death.

The earliest known ouroboros symbol comes in a 14th-century BCE Egyptian religious text found in the tomb of King Tutankhamen. The symbol appears in a passage about the origin of the sun god Ra through a union with the death god Osiris, meant to illustrate creation through destruction. Ancient Egyptians also used the ouroboros to symbolize the flooding of the Nile, which occurred in seasonal cycles and was of great importance to ancient Egyptian agriculture and society. Other ancient cultures also incorporated the ouroboros symbol. Norse legend tells of the great serpent, Jörmungandr, who encircles the earth and bites its own tail. Hindu cosmology features an ouroboros as helping to prop up the Earth.

The ouroboros was specifically adopted by Gnostic philosophers in the 2nd century BCE. For them, it symbolized the dual nature of existence, marked by life and death, male and female, light and dark, mortality and divinity, or Earth and heaven. Alchemists notably used the ouroboros, too, to represent the element Mercury, believed to permeate and unite all matter. A drawing of the ouroboros can be found in one of the earliest alchemical texts, The Chrysopoeia of Cleopatra, from the 3rd century CE.

Fast forward to 1865, when the ouroboros was reportedly the inspiration for German chemist August Kekulé von Stradonitz in his discovery of the linked carbon ring structure of a benzene molecule. Late 19th-, early 20th-century psychiatrist Carl Jung considered the ouroboros a psychological archetype, representing the subconscious desire to consume oneself and continually be reborn. A friend and translator of Jung, English psychiatrist Helton Godwin Baynes introduced ouroboros into English with his 1940 study of schizophrenia: “The uroborus symbol represents our psychic continuity with the immemorial past.”

The far Right is becoming a parody of itself, an ouroboros of Internet trolling and irony.
@jschwebach, April, 2018
Gucci's latest jewelry lineup featuring six rings, necklaces, and pendants draws inspiration from the Egyptian Ouroboros symbol, which depicts a snake and sometimes a dragon eating its own tail as part of a repetitive cycle that denotes creation arising out of destruction.
Louise Blouin, Blouin Artinfo, April, 2018
The Ouroboros is an ancient symbol depicting a serpent or dragon eating its own tail...No matter how many tricks...used by our modern alchemists, aka central bankers, they cannot alter cyclicality of credit that simple.
Macronomics, Seeking Alpha, September, 2017
SEE MORE EXAMPLES

In contemporary culture, the term ouroboros is used by scholars and academics when formally discussing ancient mythology, history, and religion. New Age spirituality, alchemy, and astrology may use the ouroboros in discussions of the cycle of life and death and of cosmic harmony.

The ouroboros is also frequently referenced in art, literature, and music, from the 1922 fantasy novel The Worm Ouroboros by Eric Rücker Eddison to the 2012 song “Ouroboros” by psych-rockers Ruby the Hatchet.

In speech and writing, the ouroboros is often called “the self-eating snake,” used as learned term or metaphor for infinity, cyclicality, or some other kinds of loop phenomena, often self-destructive in nature.

The ouroboros is also a popular tattoo and internet icon as personal symbol for rebirth.

This is not meant to be a formal definition of ouroboros like most terms we define on Dictionary.com, but is rather an informal word summary that hopefully touches upon the key aspects of the meaning and usage of ouroboros that will help our users expand their word mastery.