What does gaslighting mean?

Gaslighting is the act of distorting the truth in a way that’s intended to make another person accept the deception due to doubting their own memory, reality, or sanity. It’s considered a form of psychological manipulation or emotional abuse.

The verb form is gaslight, as in Don’t try to gaslight me—I have proof of what you’ve done!

The term gaslighting is often applied in the context of emotionally abusive relationships, such as romantic relationships or among family members. It is also sometimes used in reference to manipulative deception in other contexts, such as by politicians.

When the deception of the person who is engaging in gaslighting is questioned, they often react by dismissing the accusation as a delusion, an emotional reaction, or an overreaction—thus conditioning the person to internalize those assessments. According to mental health professionals, those targeted with gaslighting may experience lowered emotional intelligence and self-esteem due to frequently second-guessing their own judgment and sanity.

In addition to its narrow use in reference to a specific pattern of manipulative and deceitful behavior, gaslighting is also sometimes used more broadly to refer to other different forms of deception, including propaganda, disinformation, and even basic lying.

Example: It can be hard to believe how people can fall prey to such deception, but gaslighting has a very powerful effect.

Where does gaslighting come from? 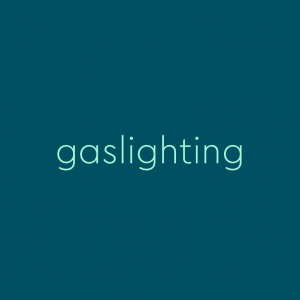 The word gaslighting (referring to the act or practice) comes from the verb gaslight. Both gaslighted and gaslit are used as the past tense of gaslight.

The verb gaslight comes from the 1938 play Gas Light by Patrick Hamilton, which also had two 1940s movie adaptations. In the story, a husband attempts to drive his wife insane by, among other things, dimming the gas lights in their house and claiming she is imagining it.

Be cautious of these signs of gaslighting

Be wary of someone who:

Gaslight and gaslighting gained more widespread, mainstream use in the later 2010s, when such terms were often applied by political commentators and critics to the rhetorical tactics of Donald Trump, both when he was a presidential candidate and during his presidency. Such criticisms often focused on Trump’s use of the term fake news to refer to established facts as a way of presenting a false narrative to the American public.

The term gaslighting was commonly used by the media during the Trump presidency and was used by the US government to describe Russia’s propaganda and disinformation strategy during Russia’s 2022 invasion of Ukraine.

Disney is just gaslighting us that the Artemis Fowl movie even exists
@SamuelAAdams, April 3, 2020
Gaslighting identifies a real phenomenon: the way critics of a line of thought sometimes try to discount the perceptions of the person producing that thought.
Katy Waldman, Slate, April 18, 2016
The United Nations Security Council will convene on Friday at Russia's request, diplomats said, to discuss Moscow's claims, presented without evidence, of U.S. "biological activities" in Ukraine, a move Washington described as gaslighting.
Humeyra Pamuk, Reuters, March 10, 2022
SEE MORE EXAMPLES

Gaslighting is commonly used to refer to a specific pattern of manipulative behavior intended to get someone to accept deception due to questioning their own sense of reality.

"Gaslighting is a communication technique in which someone causes you to question your own version of past events.

Most times, it’s meant to make you feel like you’re losing your grip on reality.

At its worst, gaslighting can
be a form of mind-control & psychological abuse."

The term has also come to be used more broadly to refer to other kinds of deceptive or dishonest behavior.

autocorrect insists on gaslighting me about the word “were.”

This is not meant to be a formal definition of gaslighting like most terms we define on Dictionary.com, but is rather an informal word summary that hopefully touches upon the key aspects of the meaning and usage of gaslighting that will help our users expand their word mastery.