What is a grammar nazi?

“It’s not ‘me and Billy.’ It’s ‘Billy and I,'” so scolds the grammar nazi. A grammar nazi is a pedant who compulsively criticizes or corrects people’s grammar mistakes, typos, misspellings, and other errors in speech or writing.

Where does grammar nazi come from? 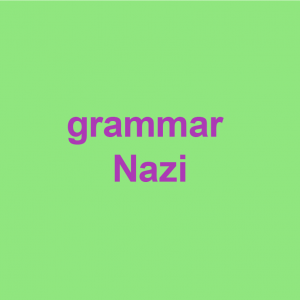 Nazis need no introduction: they were the German government and military who slaughtered over six millions Jews during World War II.

A nazi, especially as written in lowercase, became a figure of speech for anyone seen as extremely authoritarian. This use of nazi dates back to at least the 1950–60s, with self-styled surf nazis admitting their fanaticism for the waves. A grammar nazi is obsessively strict about formal rules of “grammar”—typically the little, often arbitrary stuff that a schoolmarm would correct a pupil for, like ending a sentence with a preposition. (You can totally do that, folks.) The phrase is recorded on a peeves-themed Usenet forum as early as 1990, five years before the TV sitcom Seinfeld featured its domineering Soup Nazi character.

The irony about grammar nazis is that many of the “rules” they like to impose on people are just flat-out bogus. Like splitting infinitives (e.g., to boldly go). This “rule” came into force when English grammarians were just trying to make the language more like Latin, viewed as a more perfect tongue. The thing is, it’s just impossible to split infinitives in Latin, because they are always one word (e.g., amāre is “to love”).

Grammar nazis are not to be confused with editors and copyeditors, though some of them may occasionally fancy themselves as grammar nazis. Grammar nazis also ignore the fact that Standard English is just one register of English, with other forms just as equally complex and valid, e.g., Black English or Appalachian English. This means they confuse a popular sense of so-called good/proper grammar (rules about what’s considered formal, good speaking, and writing) with linguistic grammar, which concerns the deeper structure of language. This means they may also be exhibiting some racism or classism.

Still, they persist. In 2016, writer, designer, and musician Reese Lansangan released the song “Grammar Nazi” about a woman upset with her love interest’s grammar. It went viral and is even used to teach English in Thailand.

Isn't it funny how if you correct a troll's spelling you get called a grammar nazi, but if you call and actual nazi a nazi, you get suspended for a day?
@Billablog, August 17, 2018
You probably wouldn’t call yourself a grammar serial killer or a grammar terrorist or say that you’re part of grammar ISIS, so don’t call yourself a grammar Nazi.
Mignon Fogarty, Grammar Girl, August 17, 2017
So I used to call myself a "grammar nazi" and I so regret it. So now I do my best to educate people that "proper grammar" is a myth and that grammar is subjective based on region, race, and class. Now I guess I'm a Grammar Anarchist and I want a t-shirt for it.
@EmiMonster, August 20, 2018
SEE MORE EXAMPLES

Nobody likes a grammar nazi …

Yes I do grammar nazi 🙄

… except for grammar nazis.

People generally find them irritating because they make a point of calling out small errors that are usually done by mistake and in a way that distracts from the larger substance of the content.

The mid-2010s saw the rise of white supremacists groups who’ve variously identified with Nazism. Not cool. So, if you insist on being such a pedant, maybe call yourself grammar police instead of feeding the trolls? In an age of rising far-right nationalism around the world, the original senses of the word Nazi (and fascist, for that matter) have taken on renewed urgency in culture and politics.

This is not meant to be a formal definition of grammar nazi like most terms we define on Dictionary.com, but is rather an informal word summary that hopefully touches upon the key aspects of the meaning and usage of grammar nazi that will help our users expand their word mastery.