What does Star Wars Day mean?

Falling on May 4th each year, Star Wars Day is an unofficial holiday that celebrates the massively popular sci-fi franchise Star Wars.

We reference these 8 Phrases We Adopted From Star Wars so often we might forget where they came from. Bring your verbal skills to Jedi level with these terms.

May the Fourth be with you, Baby Yoda, skywalkers, Shmi Skywalker, It’s a trap

Where does Star Wars Day come from? 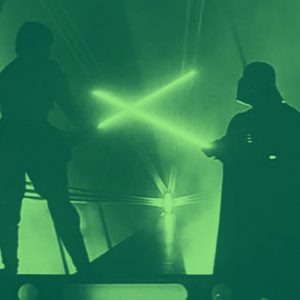 The first Star Wars film was created by George Lucas in 1977. The movie was an overnight sensation, followed by two successful sequels in 1981 and 1983. A prequel trilogy came out starting in 1999 and a sequel trilogy in 2015.

Due to the film franchise’s popularity, President Ronald Reagan’s proposed missile defense program, the Strategic Defense Initiative (SDI), was mockingly nicknamed Star Wars by the press in the mid-1980s. An early mention of a Star Wars day was, in fact, in a 1985 reference to testing of SDI technology.

Star Wars Day as a name for an annual celebration of the Star Wars films began as early as 1993. The date of Star Wars Day, May 4th, is a pun on the famous phrase from the Star Wars movies, May the Force be with you, repurposed as May the Fourth be with you. The line, delivered over a dozen times in the films, is most memorably said by Han Solo to series protagonist Luke Skywalker in the original 1977 film, A New Hope.

Star Wars Day rose to prominence in May 2005, timed with the release of the final prequel film, Revenge of the Sith. The first organized Star Wars Day event took place on May 4, 2011, at the Toronto Underground Cinema. Since then, Star Wars Day has grown into a widespread phenomenon casually marked by fans all over the globe and officially observed by Disney, who acquired Star Wars and Lucas’s production company, Lucasfilm, in 2012.

At its theme parks and on its cruises, Disney celebrates Star Wars Day as such, offering special deals on merchandise at stores and on their websites. Everyday fans also throw their own Star Wars-themed parties, dressing up as characters, showcasing beloved toys and collectibles, or discussing their favorite parts of the franchise. Some fans make tributes to the franchise, such as commemorative art or fiction.

Walking out the crib every May 4th like this 🤣🤣 Happy Star Wars day!! pic.twitter.com/GDw9ozfA8m

here is a figurine of little Grogu i made to celebrate star wars day! ✨#MayThe4thBeWithYou #babyyoda pic.twitter.com/LBKmprDYPH

In colloquial speech, people may wish one another Happy Star Wars Day and tell one another May the Fourth/force be with you. “#StarWarsDay,” “#HappyStarWarsDay,” and “#MaytheFourth” are popular on social media on the day, including among many actors from franchise. Many companies and media outlets will capitalize on Star Wars Day with franchise-related products and content tie-ins.

Happy Star Wars Day! May the 4th be with you! #StarWarsDay #MayThe4thBeWithYou pic.twitter.com/G125xCp8Eq

Star Wars Day is sometimes singled out to disparage fans’ love of the franchise, but the broad observance of the day makes any reference to Star Wars Day fizzle out as an insult.

This is not meant to be a formal definition of Star Wars Day like most terms we define on Dictionary.com, but is rather an informal word summary that hopefully touches upon the key aspects of the meaning and usage of Star Wars Day that will help our users expand their word mastery.