or yinyang or yin and yang [yin-yang]

What does yin-yang mean?

There’s light and dark, day and night, good and evil, yin and yang.

Yin-yang refers to a concept originating in ancient Chinese philosophy where opposite forces are seen as interconnected and counterbalancing.

It is commonly represented by the yin-yang symbol, a circle made up of black and white swirls, each containing a spot of the other.

Where does yin-yang come from? 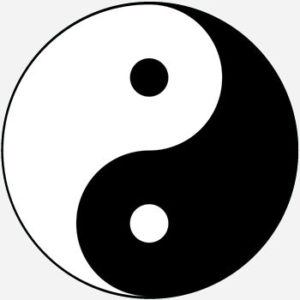 The concepts of yin and yang have been around since at least the 1300s BCE, when they were found referenced in inscriptions related to Chinese divination of the weather. One of the first mentions of yin-yang for the concept of cosmic harmony comes from a verse in the Shih Ching, a 6th-century BCE collection of poems compiled by Confucius.

Sometime between roughly 700–400 BCE, Yin-yang was the name of a school of teaching, with chief thinker: alchemist named Zou Yan. The school focused around the idea that all life revolved around five basic elements (metal, wood, water, fire, and earth), governed by the forces of yin and yang, part of the qi, or vital life force, of the cosmos.

Yin, Chinese for “female” or “moon,” represents darkness, femininity, passivity, and the earth. Yang (“sun” or “male”) represents light, masculinity, activity, and the heavens. (Do we detect some sexism, Zou Yan?) The balance of yin and yang were seen to influence health and order within an individual, society, and the entire universe.

And. their interrelationship came to be depicted in the taijitu, or “Diagram of the Great Ultimate”—better known by Westerns as the yin-yang symbol, first appearing in the 1000s CE and attributed to the philosopher Zhou Dunyi. In the symbol, yin is represented by the color black and yang, white. 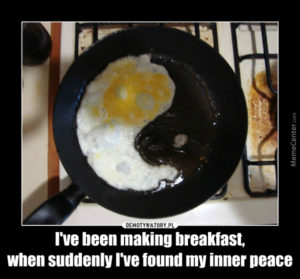 The term yin-yang is first found in English in the 1850s, and it spread in the 20th century especially thanks to interest in Eastern philosophy, non-Western medicine, and martial arts.

Unicode 1.0 approved the yin-yang symbol for computers in 1993 and added it to its Emoji 1.0 set in 2015. Like other religious and astrological emoji such the om symbol, the yin-yang emoji appears as white on a purple square ☯.

Many people choose to get a yin-yang-style koi tattoo, representing balance.
Sarah Siegel, PopSugar, May, 2018
The goal of #fengshui has been described as aligning a city, site, building, or object with #yinyang force fields.
@FengShuiFacts, May, 2018
One chapter in the book is dedicated to Yin Yang yoga, also called couple yoga. With nuclear families and with both partners working, pregnancy and a baby can change the balance. Both parents have to be involved in the pregnancy. Couple yoga, through some simple asanas, helps fine-tune your connection with your partner.
Payal Gidwani Tiwari quoted by K. Jeshi, The Hindu, May, 2018
SEE MORE EXAMPLES

In contemporary English, yin-yang (or yin and yang) is casually used to describe any two opposites seen to balance each other out or to characterize life’s ups and downs.

Always takes a toll on me talking to my uncle especially when he goes “Sometimes I feel like you’re my only friend” because honestly he is mine too. We are ying and yang standing two different generations

Everything in life is a yin-yang. Even people. Believe that.

Westerners may use yin-yang in discussing concepts of balance and harmony in their practice—or the hippy-ish, New-Age-y, and yoga-mom appropriation of—Eastern philosophical or medicinal traditions such as Tai Chi, feng shui, or acupuncture.

They may also simply use it as a shorthand for the symbol taijitu itself, from tattoos to cocktails to cat pictures. 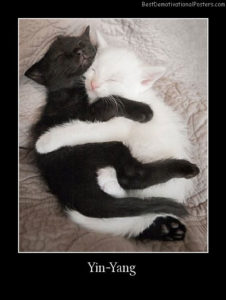 It’s important to remember, though, that the yin-yang is an important and very meaningful concept in Chinese philosophy, medicine, and religion. 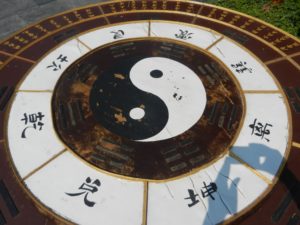 This is not meant to be a formal definition of yin-yang like most terms we define on Dictionary.com, but is rather an informal word summary that hopefully touches upon the key aspects of the meaning and usage of yin-yang that will help our users expand their word mastery.