What does regular schmegular mean?

Regular shmegular is a slang expression dismissing something or someone as being overly ordinary. Or, if you’re like rapper Cardi B, the term can be used as a way of presenting yourself as just an average person.

Where does regular shmegular come from?

Sometimes things are just too basic. You could call them regular, but that’d be too boring. Try regular shmegular instead. Regular shmegular features something called shm- reduplication, which repeats a word and replaces its first sounds with shm-. This enters English from Yiddish in the late 19th century, spreading by the 1930s.

Regular shmegular is used to dismiss something or someone, like shooing away a fly. Calling a restaurant fancy shmancy, for instance, characterizes it as too fussy to be bothered with. Or, if someone tells you to get a salad when you want a burger, you might verbally swat the suggestion away: Salad, schmalad! 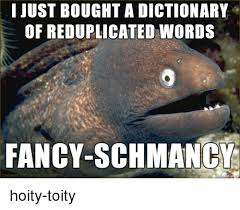 While almost certainly used in speech before then, regular shmegular is first recorded online in the 1990s on a Usenet forum where a diehard Howard Stern fan uses the term to write off another commenter.

But regular shmegular got more mainstream attention starting in 2015 thanks to rapper Cardi B during her 2015–17 appearances on the reality show Love & Hip Hop: New York. On the show, she describes herself as a “regular degular shmegular girl from the Bronx”—an area indeed home to many Jewish Americans, many of whose ancestors spoke Yiddish, potentially influencing her use of reduplication.

By regular degular shmegular, Cardi B is suggesting she’s just an average girl—though this humble tout belies the fact that she’s one of the most influential popular artists in the late 2010s.

Twitter is where regular shmegular ass girls can get famous
@esmettin, December 2012
And then, there was Belcalis Marlenis Almánzar, the regular, shmegular, degular girl from the Bronx who made history last night as Cardi B, the first solo female artist to win Rap Album of the Year.
Maiysha Kai, The Root, February 2019

Regular shmegular gets used in two different senses. The first has that homegrown, quaint, ordinary-type vibe. This is how Cardi B uses it when she describes herself.

The second sense, more in keeping with the original force of the dismissive Yiddish shm-, is basic, boring, not worth anyone’s time. Why chase after regular shmegular things when you can have something better?

don't ever settle for regular shmegular

Captioning a selfie using Cardi’s wording, e.g., I’m just a regular shmegular girl from (your city or neighborhood), is a popular homage among female women of color online.

This is not meant to be a formal definition of regular shmegular like most terms we define on Dictionary.com, but is rather an informal word summary that hopefully touches upon the key aspects of the meaning and usage of regular shmegular that will help our users expand their word mastery.