What does shut up mean?

If you would just shut up already we’ll tell you what shut up means!

Shut up is a rude way to tell someone to stop talking. It can also be used an as exclamation of amazement or excitement.

Shut up and take my money!, STFU

Where does shut up come from?

Back in the 1400s, shut up was a verb phrase meaning “to secure something away in a receptacle.” By the 1500s, shut up had evolved to variously mean “confine someone,” “close a door or window,” or “bring to a conclusion.”

In the early 1800s, we can find authors like Jane Austen and Charles Dickens more neutrally using shut up for “silencing someone.” The verb had taken on rude tones by the 1820s. It’s based on the idea of shutting one’s mouth, an expression actually recorded in the 1300s. 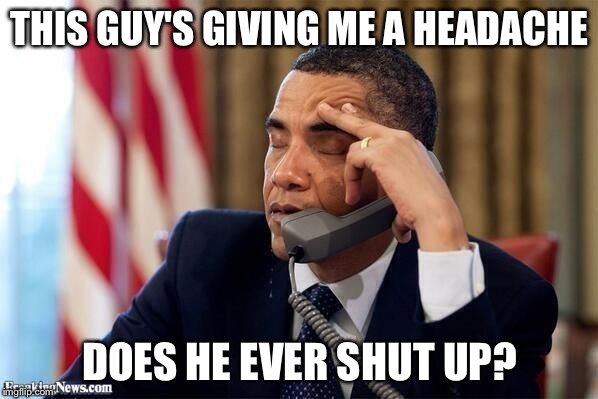 By the 20th century, shut up, while widely used in all sorts of squabbles, had become considered a very childish, impolite, or angry-sounding command—depending on tone and context, of course. For instance, if a person was receiving praise they liked hearing but wanted to feign humility, they might, with a bat of the hand, bashfully say, “Oh, shut up.”

In the late 1980s, Shut up! became a popular dramatic exclamation for “Get out of here!” or “I can’t believe what you’re telling me!”

We’ve also devised lots of ways to intensify shut up, including shut the hell up and shut the fuck up, found as the internet acronyms STHU and STFU in the early 2000s. 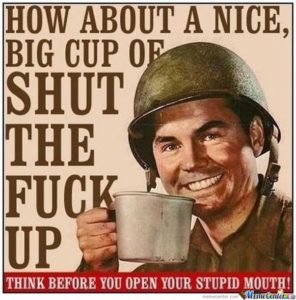 Examples of shut up

I’ll take blame for things I didn’t do to get people to shut up faster.
@paprikapancake, May, 2018
Now I pray that Harry and Meghan can do on a nice honeymoon and rest and relax, and all of my relatives will just shut up about everything.
Thomas Markle quoted by TMZ, May, 2018
I love when I'm watching a nature documentary and my dog starts barking at the lions on the TV. / Shut up, Sal. You're scared of garbage bags. There ain't no way you're taking on a fucking lion.
@amazingatheist, April, 2018
SEE MORE EXAMPLES

Who uses shut up?

In general, shut up is often seen as a disrespectful way to dismiss someone. This can range from someone making a distracting noise while you’re trying to work to stopping people from going on and on about something to trying to silence them because they are voicing an objectionable opinion.

If you cant say anything nice, please shut up. Your words reflecting you.

Shut up appears in other more forceful phrases, such as sit down and shut up.

Maybe people would be better at standing up and talking if we hadn’t been told to sit down and shut up for the first quarter of our lives.

The command shut up is often followed by another. This caused controversy in 2018 when far-right pundit Laura Ingraham told NBA star LeBron James to “shut up and dribble” rather than weigh in on politics.

This shut up and X construction can be more playful, suggesting people stop whatever they are doing for something better, as seen in Rihanna’s 2007 track “Shut Up and Drive.”

In everyday speech and on social media, many people exclaim Shut up! when they want to convey intense excitement, as if to shout “I can’t handle this!”

SHUT UP THE CHOKER THO AJSBJDJDNXKDN MENTAL BREAKDOWN DAY JUST START IT pic.twitter.com/AYhzGo5b5O

Shaddup is a humorous way of saying shut up, and hush/shush up is a milder variant.

This is not meant to be a formal definition of shut up like most terms we define on Dictionary.com, but is rather an informal word summary that hopefully touches upon the key aspects of the meaning and usage of shut up that will help our users expand their word mastery.