Suggesting feelings of jealousy and revenge, shroov is an internet meme that is used jokingly by fans of Indian actor Karan.

Where does shroov come from? 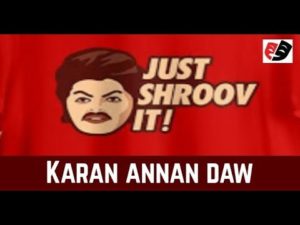 Shroov has its roots in Kollywood, the Tamil language film industry located in Chennai, India … and the word specifically focuses on one of its well known actors, Karan. Originally a child star (born in 1969), Karan gained a cult following over the years by people who call themselves Karanians.

In 2018, Karanians rediscovered a scene from Karan’s 1996 film Coimbatore Mappillai. In it, Karan’s character Mahesh overhears Balu (in love with the same woman as he is) plotting against him, and then decides to get revenge. While the scene doesn’t actually show Mahesh scheming, the information is conveyed via the character’s body language and a sound effect, called a shroov.

Karan, who had been mostly out of the limelight since the 1990s, was pleasantly surprised by the newfound popularity of shroov. In a 2018 interview with The Hindu, Karan said:

I remember watching the film at a preview theatre, and many people appreciated the ‘Shroov’ phrase even back then. But I had no clue that it would become popular now. Everywhere I go, people keep saying, “Shroov Shroov.”

Shroov is used mostly with amused appreciation by fans of Karan, either in memes or social-media posts. Shroov can even be used as a nickname for Karan himself too. 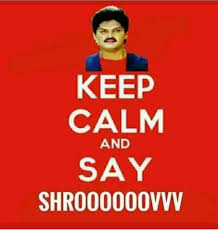 This is not meant to be a formal definition of shroov like most terms we define on Dictionary.com, but is rather an informal word summary that hopefully touches upon the key aspects of the meaning and usage of shroov that will help our users expand their word mastery.