What does spank bank mean?

Where does spank bank come from? 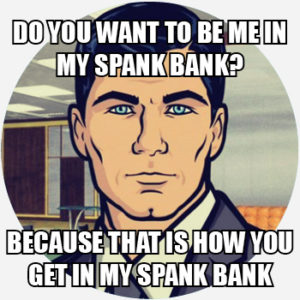 As a term, spank bank was popularized in the late 1990s, particularly among young men. In the 1999 film 10 Things I Hate About You, one male character says to another about his female love interest: “She, my friend, is what we will spend the rest of our lives not having. Put her in your ‘Spank Bank’ and move on.”

Spank bank is most often still used in sexual contexts, especially online or in off-color remarks in a familiar group. However, spank bank can metaphorically refer to any kind of mental collection for later enjoyment or encouragement, such as a literary spank bank of motivational quotes. The extension of the term, here, implies content that one intellectually or aesthetically “gets off to.”

Punning on the financial bank, some users describe the act of mentally noting sexy images or situations as making a deposit into the spank bank. A person may be described as spank-bank material, spank-bank-worthy, or spank bankable.

This is not meant to be a formal definition of spank bank like most terms we define on Dictionary.com, but is rather an informal word summary that hopefully touches upon the key aspects of the meaning and usage of spank bank that will help our users expand their word mastery.