What does fap mean?

Where does fap come from? 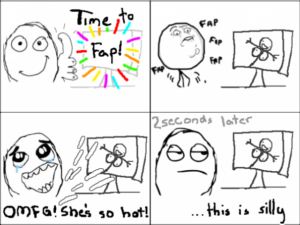 Fap is a verb. It’s commonly found in gerund form, as in fapping in the sink is gross. It also is sometimes a noun, a fapper.

Inevitably with internet culture, fap inspired memes. One, created in 2011, is a kind of rage comic depicting a character, Fap Guy, with a strained face and fapping whenever a woman shows the slightest kindness to or interest in him.

This is not meant to be a formal definition of fap like most terms we define on Dictionary.com, but is rather an informal word summary that hopefully touches upon the key aspects of the meaning and usage of fap that will help our users expand their word mastery.