Everything After Z by Dictionary.com
Previous Word: subreddit
Next Word: succ

Ima subtweet about my bf first before i confront him on why im upset
@PinkMiruku, April, 2018
I like to read every subtweet and imagine what I would say if it was bout me
@cigfig, November, 2014
After Amanda Bynes went on a bizarre, now-deleted Twitter rant in 2013 that included a racist tweet about Rihanna’s appearance and an unfortunate reference to Chris Brown’s domestic violence towards Rihanna, Ri had a single subtweet for Amanda that spoke for itself.
Cady Lang, Time, December, 2017

Where does subtweet come from? 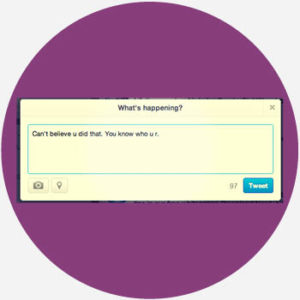 A blend of subliminal and tweet, the term subtweet emerges on Twitter in 2009. An early instance, and illustration of the social-media practice, comes from @Chelsea_x_Rae that year: “I hate when I see people who dnt txt or call me or even tweet me anymore make general tweets. Fuckk U. & Yes that was a SubTweet.”

As this tweeter makes clear, the subject of a subtweet shouldn’t know it’s about them, as subtweeting is the internet equivalent of talking behind someone’s back (hence, subliminal tweet). A subtweet is usually sent when someone wants to avoid confrontation with the subject but still wants to complain about them.

The internet slang spread in the 2010s, when publications from BuzzFeed to The Guardian widely noted both the term and phenomenon. Gossip blogs and tabloids also reported on the subtweets of celebrities like Nicki Minaj, Kim Kardashian, Chris Brown, and Adam Levine. Around 2015, as noted in publications from The Washington Post to Teen Vogue, internet culture began to look down upon subtweeting due to its passive-aggressive nature—not to mention the confusion subtweets can cause without a clear reference, leading some to mistake themselves as its subject.

In colloquial speech and writing, a subtweet can be used as a noun (I saw that subtweet about your ex) and verb (I saw you subtweeted about your ex). Generally, subtweeters don’t announce they are subtweeting unless they are wryly noting they are engaging in the practice (You better believe that was a subtweet.).

Among some internet users, subtweet is used to criticize the practice as immature or passé. Among others, subtweet is used in discussions of the nature of internet culture itself, often incorporated into memes. One popular meme features the glass slipper being placed on the foot of Disney’s Cinderella with the caption: “That subtweet wasn’t about you but if the shoe fits…”

Although subtweet originated and is largely used on Twitter, any shady post on a social-media site can be labelled a subtweet. On Facebook, a similar practice is sometimes called vaguebooking. The term subtweet has drifted into speech as a colloquial term for an underhanded or behind-the-back remark. For instance, if someone said, “Someone around here should mind their own business,” an internet-savvy person might reply, “Wow, what a subtweet.”