Feedback
what the actual fuck
what’s up

What’s your 20? is CB (Citizens Band radio) lingo for “What’s your location?” What’s your 2020 can be part of a question about a person’s presidential aspirations for the 2020 election or about a person or organization’s goals or aims for the year 2020. (How’d those plans turn out?)

Where does What’s your 20? come from? 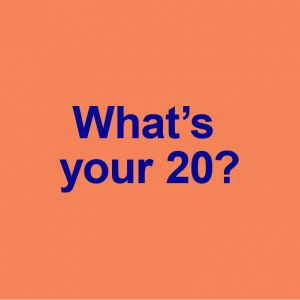 What’s your 20? is part of a system of radio codes called 10-codes. They developed in the late 1930s when police squads began using two-way radio to communicate. One was 10-20, meaning “location.” Asking What’s your 20? emerged as a way to seek another’s whereabouts. It spread into CB radio in the late 1940s and into truck-driving culture in the 1970–80s.

What’s your 2020 has appeared in phrases asking about people’s targets for the year 2020, such as a plan for cutting carbon emissions and business’s five-year strategy.

@ScottMorrisonMP So you voted against the CPRS? …because you support a science-based response? What's your 2020 emissions target?

It has also occasionally appeared in phrases asking after people’s presidential aspirations. In 2017, for instance, the website Playbuzz featured a quiz that generated a humorous answer to What’s your 2020 campaign slogan?

can't wait til we all get to meme the inevitable "what's YOUR 2020 vision?" ads the establishment dems r gonna run during campaign season

Examples of What’s your 20?

What’s your 20? is used over the airwaves. Truckers and CB radio enthusiasts may ask about twenties to ascertain location, though law enforcement has mostly stopped using it. The question is also popular in mainstream culture as a colloquial expression or as a playful phrase used with walkie-talkies.

.@elonmusk What's your 2020 campaign slogan though? That one must have an exclamation point.#KeepAmericaGreat #exclamationmark #SpaceForce #Covfefe https://t.co/5I3NwZPH0T

This is not meant to be a formal definition of What’s your 20? like most terms we define on Dictionary.com, but is rather an informal word summary that hopefully touches upon the key aspects of the meaning and usage of What’s your 20? that will help our users expand their word mastery.