When the force of a swearword is too extreme (but some form of cuss must be used) symbolic stand-ins have long been used for lewdness. Suffice it to say, any emotional keyboard-striker can blurt out something that people perceive as a sub for swears. Whether it’s to diminish the force of swear, to get around censorship rules, or maybe just because symbols are @#$%ing cool to look at, people still use symbolic swearing today.

How did symbols come to signify taboo language? Much of the answer lies in comic strips. But, before we get there, we’ve got to go over some of the history of typographical bleeping.

The earliest examples of typographical bleeping are in the form of the dash, the most visually boring of the symbols. The asterisk also pecked its way into taboo-land early on, but the dash is much more experienced.

Incidentally, the conventional use of the dash (also referred to as blank because of the space left between letters) led to the swearing euphemism blankety-blank toward the end of the 1800s.

WATCH: What Are Synonyms For The F Word?

How did using symbols for swears originate?

Using symbols for swears has a long history (some even think it traces back to Ancient Egypt, as so many things do). But, leave it to two wild kids, Hans and Fritz, to be the ones responsible for today’s buffet of symbolic swears. The tykes were characters in The Katzenjammer Kids, a comic strip from the early 1900s. Rudolph Dirks, the 20-year old German immigrant cartoonist who drew the kids into being, likely invented both the speech bubble and the comic iconography of profanity—how’s that for posterity?

The first recorded use of symbolic swearing occurs in a 1902 episode of the comic, where the impish Katzenjammers mess with Uncle Heinie on a ladder. Fuming, Uncle Heinie unleashes a speech bubble of “[star]-[anchor]-!-!-?-[dung pile?]”; the anchor is a particularly nice touch, what with “swearing like a sailor” and all. 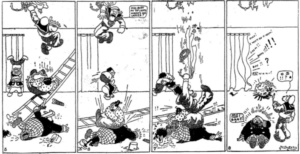 Over the decades, the comic-strip world so embraced swear-symbols that in the 1960s the cartoonist Mort Walker devised the tongue-in-cheek term grawlix to describe them. The more recent portmanteau obscenicon (fusing obscenity and icon), coined by linguist Ben Zimmer, is a more accurate representation of this phenomena.

Whether you side with grawlix or obscenicon, swear symbols are so ubiquitous and entrenched in our visual vernacular that even country singer Kevin Fowler contributed the first comic-bubble-swear-turned-song-lyric: “I feel like pound-sign, question mark, star, exclamation point.”

Trick the masses and get away with using these old-time swear words that have gone neglected for too long!

Home / Trending Words / Why Do We Use Symbols To Censor Swearwords?