Feedback
Previous Gadabouts Won't Forget About This Word Of The Day Quiz Next Is "Crude" The Right Word To Use To Describe Someone's Language? 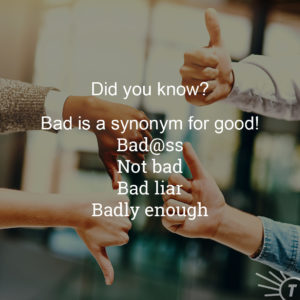 The word bad is well, just that. Its original meaning is still the most common one in use today: “not good in any manner or degree.”

But, come on, we all know bad isn’t always a bad thing … in fact, using bad as a word of approval started in the 1890s and was popularized in the 1920s within the jazz scene. There’s even a quote from a Run DMC song that illustrates our point: “He’s a big bad wolf in your neighborhood. Not bad meaning bad but bad meaning good.”

People (and Thesaurus.com) have known for a while that sometimes being bad is really, really good—especially in the bad phrases below. Carry on.

Leather, motorcycles, mystery: these are the stigmatic indications of someone who is a badass.

Originally meaning an “unpleasant” individual in the 1950s, by the 1970s the term had become a designation of those who go against the grain, preserving their own originality while fighting the authority.

Steve McQueen and Joan Jett are just a couple of history’s badasses that paved the way for going against what was “normal” and embracing individuality, all the while pulling off an outrageous stunt or two that was bad … in a very good way. To this day, the prospect of being a badass is way cooler than being a goodie two shoes.

Separately, these two have some pretty negative connotations. But together? They’re an empowering phrase that many women—particularly in the rapping and hip-hop community—call themselves. Originally the phrase referred to female dogs that were inept at breeding good stock. By the1990s, the term began to creep up in the hip-hop scene in a more complimentary manner.

From Bebe Rexha to Rihanna, self-proclaimed bad b!tches don’t take any nonsense from anyone. They’re strong women who know exactly what they want and how they’re going to get it.They blaze their own trails, even if people do think they’re, well, the B-word. There are even books on how to become one.

Today, all the nice guys gripe about how girls always go for the bad boys. What’s the appeal, anyway?

Well, in the late 1920s, these gripers had a point— bad boy was a denomination for young criminals (or, in some cases, a black person who rejects white control—uh, yikes).

By the 1950s, however, bad boy took on a new mantle. People became more impressed by the bad boy, the one who wasn’t boring or dull. Their “badness” added a bit of personality and mystery, making them exciting. Heck, there’s even a movie franchise glorifying the idea of being a bad boy.

The 1970s were a strange time all around. Impeached presidents, sex, drugs, bell-bottoms … things just didn’t make sense. To add to the general confusion, the phrase bad rags popped up in African American slang in approximately 1972. Aside from what you might infer it means … it actually was used to describe “one’s best, most fashionable clothes.” Doesn’t really make sense, right? Totally seventies.

This may be delivered in a chastising manner, but think about it: if someone is a bad liar, that means they are an honest individual. And honesty is always the best policy, right?

One of the earliest recordings of this phrase was in 1842 in reference to the “art of lying” and its importance in society (think about it). In 1864, the first Marquess of Wharton—an English nobleman and politician—even reportedly prided himself on being a bad liar, or on having the bad habit of lying frequently.

It wasn’t until between the early and mid-20th century that the phrase began to refer to someone who lied poorly, referring to those who spoke with a smidgen of truth.

During high-profiled job interviews, during pep talks before major games, interviewers and coaches always ask the same question: “Do you want this badly enough?”

If someone wants something badly enough, it means they’re going to do everything they can to get it. It motivates a goal of achieving something that’s typically hard to obtain. However, one of its earliest recorded uses in the late 1500s paired it in reference with a negative meaning (in other words, “not great”). It maintained this negative connotation until the late 19th century, when it was used in reference to wanting something in an almost desperate manner … but that was considered a positive. This is the meaning that has been retained ever since.

On the opposite side of things, if people aren’t good enough, that means they fall short. Good can be just as fickle as bad …

This rather ironic phrase first popped up in 1771. Why “ironic,” you ask?

Well, when someone deems something as not bad, they’re stating something is actually quite good. In fact, that not bad something could even be rather impressive!

Emerging from African American circles, not bad has become a subtle nod of approval for feats of success that typically catch people off-guard. Why they can’t just praise us with having a “good idea” though … we’ll never know.

Previous Gadabouts Won't Forget About This Word Of The Day Quiz Next Is "Crude" The Right Word To Use To Describe Someone's Language?
RELATED POSTS