asserting, resulting from, or characterized by belief in the equality of all people, especially in political, economic, or social life.

What is the origin of egalitarian?

The English adjective and noun egalitarian “asserting, resulting from, or characterized by belief in the equality of all people, especially in political, economic, or social life,“ comes from the French adjective and noun égalitaire of the same meaning. Égalitaire is a derivative of the noun égalité “equality,” but in English égalité is usually used in allusion to the French Revolutionary motto liberté, égalité, fraternité “liberty, equality, fraternity.” (Égalité first appears in English in 1794 in a letter written by vice president John Adams to his wife Abigail: “I hope my old Friend, will never meet the Fate of another Preacher of Égalité, who was I fear almost as sincere as himself.”) Égalité is a derivative of the adjective égal, from the Latin adjective aequālis “equal (in amount, size, duration, etc.), symmetrical, uniform, contemporary” (as a noun, aequālis means “a person of the same age as another, a contemporary, a person of equal rank or ability.” Egalitarian entered English in the late 19th century.

how is egalitarian used?

If we do not learn the lessons of history and choose a radically different path forward, we may lose our last chance at creating a truly inclusive, egalitarian democracy.

Our commitment to egalitarian ideals has been severely tested by everything from the untenable quality of the United States’s yawning wealth gap to the resurgence of an ethno-nationalism that has led to anti-humanitarian policies against Latinx migrants and Muslim families.

SYNONYM OF THE DAY
Double your word knowledge with the Synonym of the Day!
SEE TODAY'S SYNONYM
Load More
Jul 02 repudiate
Jul 04 egalitarian
Word of the Day Calendar 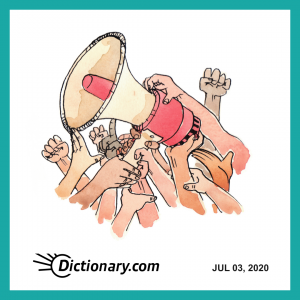