the honor of winning at least one Emmy, Grammy, Oscar, and Tony in competitive rather than honorary categories: How many people have won an EGOT?

What is the origin of EGOT?

The acronym EGOT was coined in 1984 by the American actor Philip Michael Thomas (born 1949) from the initial letters of the Emmy, Grammy, Oscar, and Tony awards. It was later popularized by the TV show 30 Rock. As of 2019, 15 people have accomplished this feat.

how is EGOT used?

Anderson-Lopez’s husband co-created “The Book of Mormon” and “Avenue Q,” and is the youngest person ever to claim the EGOT, or the rare Emmy-Grammy-Oscar-Tony show-biz grand slam.

Jia Tolentino, "How to Follow Your Dreams and Burst Into Song," The New Yorker, December 22, 2016

Porter’s win puts him on the road to EGOT glory.

SYNONYM OF THE DAY
Double your word knowledge with the Synonym of the Day!
SEE TODAY'S SYNONYM
Load More
Jan 24 hobnob
Jan 26 EGOT
Word of the Day Calendar

belonging or pertaining to the rodent subfamily Murinae, which includes more than 500 species of mice and rats.

What is the origin of murine?

Murine is an uncommon adjective pretty much restricted in zoology to mice and rats and the diseases they cause or transmit. Murine comes straight from the Latin adjective mūrīnus “of mice, mouse-colored,” a derivative of the noun mūs (inflectional stem mūr-). During the 4th century b.c., original intervocalic s in Latin became r; thus the Roman gens name Papīsius became Papīrius, and mūsīnus (if the word already existed) became mūrīnus. Mūs remains unchanged in the Latin derivative noun mūsculus “muscle.” Mūs is identical with the very common Proto-Indo-European noun mūs, which remains mūs also in Germanic (English mouse); mūs becomes mŷs in Greek, mū́ṣ– in Sanskrit, and mysz in Polish. Murine entered English in the early 17th century. 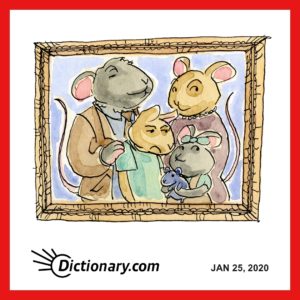 how is murine used?

His estimate of just over two million rats in the city would have been horrifying but for the long-held belief that New York housed equal numbers of rats and humans, as if a municipal sponsor program had assigned each of the eight million New Yorkers a muck-dwelling murine counterpart.

Jelani Cobb, "Donald Trump, Elijah Cummings, and the Definition of a Rodent," The New Yorker, July 29, 2019

But in order to study how that activity affects human brains at the cellular level, researchers at the University of Oregon managed to put murine brains into a somewhat equivalent state.

to associate on very friendly terms (usually followed by with): She often hobnobs with royalty.

What is the origin of hobnob?

The verb hobnob, originally meaning “to drink together, toast one another in turn,” is a rhyming phrase (like willy-nilly). Hobnob is an alteration of hab nab, hab or nab “whether or not, haphazardly,” literally “(whether) I/you/he/she have or not have,” formed from habbe and nabbe, the present subjunctive of the Middle English verbs haven, habben and nabben (Old English habban, nabban) “to have, not to have.” Hobnob was used as a toast when clinking goblets. Willy-nilly comes from will I/you/he/she, nill I/you/he/she “(whether) I/you/he/she want to or not.” Hobnob in the sense “to drink together, toast one another” entered English in the second half of the 18th century; the sense “to associate on friendly terms” entered English in the first half of the 19th century.

how is hobnob used?

… they were to hobnob with nobility and hold friendly converse with kings and princes, grand moguls, and the anointed lords of mighty empires!

Didn’t I want to get out there, hobnob, curry favor, court support, mix it up, do battle, become a gladiator? I did not.