to assemble quickly or from whatever is at hand, especially for temporary use: to jury-rig stage lights using automobile headlights.

What is the origin of jury-rig?

Jury-rig, “to assemble quickly with whatever is at hand, improvise, especially for temporary use,” is of obscure origin, but probably originally a nautical term, based on another, earlier nautical term jury-mast, “a temporary mast on a sailing vessel replacing a damaged or destroyed mast,” first recorded in 1617. Jury-rig is close enough in meaning and sound to jerry- in jerry-build (and its derivatives jerry-builder and jerry-built) “to build or make in a haphazard, slovenly fashion,” and the confusion of those terms resulted in the hybrid verb jerry-rig, first recorded about 1960. (There are people in south Jersey and Philadelphia who pronounce ferry as furry and color as keller.) But jerry-build and jerry-rig always imply flimsiness and shoddiness; jury-rig implies improvisation. Jury-rig entered English in the second half of the 18th century. 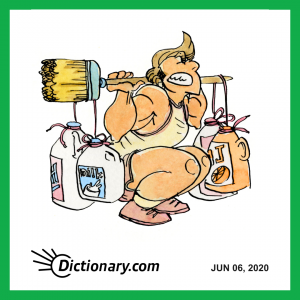 how is jury-rig used?

She told the school custodian that her bike handlebars were all screwed up and that she needed some duct tape to jury–rig it until she got home.

New problems arose all the time, and the engineers were forever improvising ways to jury-rig a component or bypass a system.

SYNONYM OF THE DAY
Double your word knowledge with the Synonym of the Day!
SEE TODAY'S SYNONYM
Load More
Jun 04 caseous
Jun 06 jury-rig
Word of the Day Calendar

very disorganized; messy or confused: I’ve had a shambolic year, the worst ever.

What is the origin of shambolic?

Shambolic, “disorganized; messy or confused,” is a colloquial adjective, used mostly by the British. The word is a combination of shambles and symbolic. Shambolic is a fairly recent coinage, entering English about 1970.

how is shambolic used?

a programme to train thousands of contact-tracers to help control the spread of coronavirus has been described as shambolic and inadequate by recruits.

Frances Perraudin, "'No one had any idea': Contact tracers lack knowledge about Covid-19 job," The Guardian, May 20, 2020

If democratic procedures start to seem shambolic, then democratic ideas will seem questionable as well.

What is the origin of caseous?

The English adjective caseous derives from the Latin noun cāseus “cheese,” which in Latin comedy (Plautus), at least, is used as a term of endearment: molliculus cāseus “delicate cheese.” (Molliculus is a diminutive of the adjective mollis “soft.” Diminutives are characteristic of colloquial Latin, and therefore of comedy, and also exist in modern Romance languages, e.g., Italian orecchio “ear,” from auricula, a diminutive of auris “ear.”) The etymology of cāseus is unknown, but it may come from earlier, unrecorded kwātsos, meaning “something runny,” from the Proto-Indo-European root kwat- “to ferment; be, become, or make sour.” If that is so, cāseus may be related to Russian kvas “sour beer,” and Polish kwas “acid.” Caseous entered English in the mid-17th century.

how is caseous used?

I have no doubt but that in the process of churning the whole milk there is a large amount of lactic acid formed, and a much higher temperature attained, than in the churning of cream; consequently, the separation of caseous matter must be more perfectly effected in the former than in the latter case.

Charles A. Cameron, The Stock-Feeder's Manual: The Chemistry of Food in Relation to the Breeding and Feeding of Live Stock, 1868