flowing with honey; sweetened with or as if with honey.

What is the origin of mellifluous?

Mellifluous comes from Late Latin mellifluus “flowing with honey, (of a taste or scent) sweetened with or as if with honey,” and by extension “eloquent, persuasive.” Mellifluus is a compound of mel (inflectional stem mell-) “honey” and –fluus “flowing,” a derivative of fluere “to flow.” Mel is the Latin result of the Proto-Indo-European melit “honey,” which in Greek appears as méli (inflectional stem mélit-). Melit– corresponds exactly with Hittite milit (from melit), Old Irish mil (also from melit). In the Germanic languages, an expanded form, melitom, yields Gothic milith “honey,” Old English mildēaw, meledēaw “honey dew, nectar” (in English, the mil– of mildew, which was thought to be distilled or condensed from air like dew). Mellifluous entered English in the 14th century. 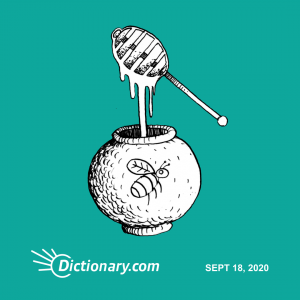 how is mellifluous used?

As the bee flies from flower to flower, taking nectar from each blossom in order to make its mysterious, mellifluous conversion, so the poet should, according to Seneca, “blend those several flavors into one delicious compound …”

He is Mr. A. I. Kaplan, whose power to aid art came through his efficient conduct in the molasses business, about which mellifluous substance he knows more than anyone else in the world.

SYNONYM OF THE DAY
Double your word knowledge with the Synonym of the Day!
SEE TODAY'S SYNONYM
Load More
Sep 16 quondam
Sep 18 mellifluous
Word of the Day Calendar

What is the origin of festinate?

Festinate, a verb meaning “to hurry, hasten,” comes from Latin festīnātus, the past participle of the verb festīnāre “to make haste, hasten, hurry.” One of the emperor Augustus’s homely sayings was festīnā lentē “make haste slowly.” Festīnāre comes from the Latin root festi-, from an unrecorded Italic root ferst-, from the uncommon Proto-Indo-European root bheres-, bhers– “quick,” source of Irish bras and Welsh brys, both meaning “quick.” In Slavic, bhers– appears in the Polish adverb bardzo “very,” Czech brzo, brzý “early, soon,” and Russian borzóĭ “quick, swift,” also the name of a Russian breed of wolfhound. Festinate entered English as an adverb at the end of the 16th century, and as a verb in the mid-17th.

A bagatelle, ailing notes of a typochondriac, something to festinate the coming of spring or to take your mind off The Four Horsemen. Allons!

That night he had had the firm belief that he would never need to eat again as long as he lived, and he wandered around in the dark, keeping his legs moving in a desperate attempt to festinate digestion …

What is the origin of quondam?

how is quondam used?

A few hundred pages after faintly praising me as “a nice enough fellow and I’m sure a very smart guy for a hack,” the book’s narrator (a quondam critic with nothing nice to say about Charlie Kaufman) challenges me to a barroom argument about cinema.

So much has been written of late years about Wordsworth and Shelley, while their quondam rival has been treated with much contumelious silence, that the disdainers of Byron had begun to feel that the ground was entirely their own; and the faithful few, who in secret handed down the old Byron cult, must have fallen into desperation …