What is the origin of panivorous?

The English adjective panivorous “bread-eating” comes from the Latin noun pānis (inflectional stem pāni-) “bread” and the Latin combining form -vorus “devouring,” a derivative of the verb vorāre “to eat up, devour” (pānivorus does not occur in Latin). 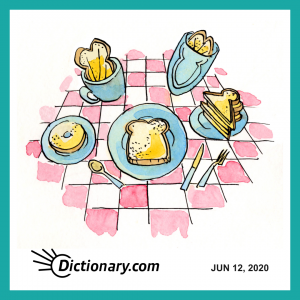 I ate it toasted for breakfast and took it to school as the foundation of my lunch sandwich. An equivocal frisson traversed my now infinitely more sophisticated panivorous spirit when I read that Wonder Bread’s parent company filed for bankruptcy in 2012.

the people who persevered in their panivorous propensities, accused the emperor of selling our corn to the English.

SYNONYM OF THE DAY
Double your word knowledge with the Synonym of the Day!
SEE TODAY'S SYNONYM
Load More
Jun 10 skulduggery
Jun 12 panivorous
Word of the Day Calendar

a casual gathering of people, especially for refreshments and informal conversation: a sewing klatsch.

What is the origin of klatsch?

You usually associate klatsch “a casual party” with coffee klatsch “a casual gathering for gossiping and drinking coffee.” Coffee klatsch is a partial rendering of German Kaffeeklatsch (in English kaffee klatsch or kaffee klatch). Coffee and Kaffee need no explanation. Klatsch is informal German for “gossip, gossiping,” from the verb klatschen, of imitative origin. In German Klatsch also means “a slap, a crack (as of a bat), a clap (of the hands).” Klatsch (klatch) entered English in the 1950s.

how is klatsch used?

Maybe they didn’t have anything in common and that was the point, was the thing that made the klatsch interesting, hearing the various perspectives people had.

At coffee-break time, Billy made a nice addition to our little klatsch.

dishonorable proceedings; mean dishonesty or trickery: bribery, graft, and other such skulduggery.

What is the origin of skulduggery?

Skulduggery was originally an Americanism, a variant of Scottish sculduddery “fornication, lewd conduct, obscenity.” In American usage, skulduggery has cleaned up its act and means only “dishonorable dealings, trickery.” Neither sculduddery nor skulduggery has a reliable etymology. Sculduddery entered English in the first half of the 18th century, skullduggery in the second half.

how is skulduggery used?

corporate malfeasance is too often hidden in quarterly reports and harder for most people to follow. Political skulduggery is done in the open—and on C-Span—and is easier to portray.

the club was a renowned haunt of maverick sea captains, wily eccentrics, and semi-alcoholic miscreants up to their necks in all manner of skulduggery.