[ sahy-tuh-kahyn ]
/ ˈsaɪ təˌkaɪn /
Save This Word!
This shows grade level based on the word's complexity.

noun
a type of small protein, as interferon, secreted by certain cells, especially immune cells, that helps regulate the body’s immune response to inflammation and disease:Cytokines are like the body’s messenger system for mobilizing its response to pathogens. The largest group of cytokines that stimulate immune cell proliferation are the interleukins.
QUIZ
QUIZ YOURSELF ON "IS" VS. "ARE"
"Is" it time for a new quiz? "Are" you ready? Then prove your excellent skills on using "is" vs. "are."
Question 1 of 7
IS and ARE are both forms of which verb?
have
be
TAKE THE QUIZ TO FIND OUT

What is a cytokine?

A cytokine is a type of protein released by cells in the body to carry messages to other cells. These messages tell the cells to do something, like to start an immune response.

Cytokines get triggered by the presence of an antigen, which is any substance, such as a bacterium or virus, that causes the body to produce antibodies.

There are many different types of cytokines. Common types are interleukins and lymphokines, which include the cytokines known as interferons.

Cytokines play an important role in many different processes, including the regulation of inflammation and the immune response. Sometimes, though, too many cytokines get released. This is known as a cytokine storm, and it makes the body attack itself, resulting in potentially deadly damage to healthy tissue.

What is a cytokine storm?

A cytokine storm is an overreaction of the immune system to something that the body identifies as a threat. Normally, when your immune system detects an antigen in the body, immune cells rush to the area and attack the invader. But sometimes the body releases too many cytokines. This causes too many immune cells to show up and start attacking the body’s own healthy tissue, sometimes causing even more damage than the disease that triggered the response.

Cytokine storms are known to happen as a result of some infectious diseases, including influenza and pneumonia, as well as some noninfectious ones, like multiple sclerosis.

Public awareness of cytokine storms increased during the outbreak of the strain of influenza known as bird flu, as well as during the COVID-19 pandemic. Many fatal cases of both diseases are thought to be the result of cytokine storms triggered by the presence of the disease. In some severe cases of COVID-19, a cytokine storm may result in excessive inflammation in the lungs, among other complications that can be deadly.

Why are cytokines important?

Basically, cytokines are messengers that tell the cells in your body to behave a certain way. The word cytokine is formed from cyto–, meaning “cell,” and –kine, referring to movement. Cytokines stimulate cell movement.

Cytokines are secreted (released) by cells in response to antigens. Antigens cause the body to produce antibodies, which attach to antigens and make them harmless or help the body to destroy them.

But cytokines themselves are not antibodies. The presence of an antigen triggers the release of cytokines, which then tell other cells to start the antibody-producing immune response.

Cytokines act in many different parts of your body. They can act on the cell that secreted them or on a cell that’s close by, or they can travel a long way to act on cells elsewhere in the body. Cytokines have many tasks, and a very important one is telling immune cells to go to parts of the body where they’re needed.

For example, cytokines called lymphokines activate certain white blood cells called macrophages that basically eat foreign particles and infectious microorganisms. Lymphokines also trigger the production of lymphocytes, which then trigger the production of antibodies and other white blood cells that work to identify and bind to certain antigens. Some lymphokines are interferons. Interferons regulate the body’s immune response by blocking a virus from reproducing in newly infected cells or inducing resistance to the virus in other cells.

Cytokines are important to the body’s immune response. But when that response goes wrong, it can cause even bigger problems. Cytokine storms, like those caused by certain coronaviruses or inflammatory autoimmune diseases like rheumatoid arthritis, are the subject of a lot of research to more fully understand why they happen and how they can be stopped.

Cytokines can also be called chemokines. The term cytokine was introduced in the 1970s and is modeled on earlier terms like lymphokine and monokine.

What are real-life examples of cytokine?

Cytokines known as interleukins have been used in the treatment of some cancers. Here is a model of what the structure of interleukin looks like. 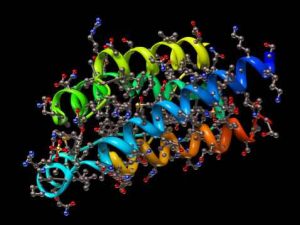 An antibody treatment being developed to treat rheumatoid arthritis will go into testing in patients with coronavirus later this month, developers say. GlaxoSmithKline says the drug might help calm down an immune system overreaction called a cytokine storm https://t.co/pshXIQsYSJ

What other words are related to cytokine?

Cytokines are types of antibodies.

How to use cytokine in a sentence

cytokine
[ sī′tə-kīn′ ]
n.
Any of several nonantibody proteins, such as lymphokines, that are released by a cell population on contact with a specific antigen and act as intercellular mediators, as in the generation of an immune response.
The American Heritage® Stedman's Medical Dictionary Copyright © 2002, 2001, 1995 by Houghton Mifflin Company. Published by Houghton Mifflin Company.

cytokine
[ sī′tə-kīn′ ]
Any of several regulatory proteins, such as the interleukins and lymphokines, that are released by cells of the immune system and act as intercellular mediators in the generation of an immune response. Also called chemokine
The American Heritage® Science Dictionary Copyright © 2011. Published by Houghton Mifflin Harcourt Publishing Company. All rights reserved.