[ an-ti-juhn ]
/ ˈæn tɪ dʒən /
See the most commonly confused word associated with antigen
Save This Word!
See synonyms for antigen on Thesaurus.com
This shows grade level based on the word's complexity.
noun
Immunology. any substance, as a protein, carbohydrate, etc., that, on entering the body, can stimulate an immune response and combine with a specific antibody or T cell receptor having a matching molecular structure.
Pharmacology. any commercial substance, usually synthetic, that stimulates the production ofantibodies when injected or absorbed into animal tissues.
antigens of a particular type collectively.

Click for a side-by-side comparison of meanings. Use the word comparison feature to learn the differences between similar and commonly confused words.
QUIZ
SHALL WE PLAY A "SHALL" VS. "SHOULD" CHALLENGE?
Should you take this quiz on “shall” versus “should”? It should prove to be a quick challenge!
Question 1 of 6
Which form is used to state an obligation or duty someone has?
shall
should
TAKE THE QUIZ TO FIND OUT

OTHER WORDS FROM antigen

What does antigen mean?

An antigen is a substance that causes an immune response in the body—specifically, an antigen causes the body to produce antibodies. Antigens are things like viruses, bacteria, toxins, cancer cells, and other foreign substances, like the cells of a transplanted organ.

An antibody is a protein produced by some cells as part of the immune system’s defenses. Antibodies attach to antigens and make them harmless or help the body to destroy them.

Antigens are studied in fields like immunology, virology, and pharmacology. Most vaccines contain forms of antigens that trigger the body to produce specific antibodies to fight that antigen.

Why is antigen important?

There are a lot of things that can get inside the body that we don’t want to be there, like viruses, bacteria, and toxins—all of these things are antigens. But antigen doesn’t necessarily mean something bad—it specifically refers to a substance that causes the body to create antibodies. (For example, the cells of transplanted organs can be considered antigens if they trigger an immune response.) In fact, antigen is a combination of the word antibody and the suffix –gen, which means “that which produces.”

When antigens enter the body, a healthy immune system goes on alert. White blood cells called lymphocytes identify and target the antigen and start the production of antibodies. The antibodies find the antigens, attach to them, and then deactivate them or lead them to special white blood cells (called macrophages) that basically eat and destroy them (cue the Pac-Man music). If the same antigen shows up again, the body will be able to quickly manufacture more of those specific antibodies to counter the threat.

This is how vaccines work. Vaccines consist of a small amount of an antigen, such as a virus or bacterium, that has been killed, weakened, or modified so that it’s not harmful. Introducing this small amount trains the body to identify that specific antigen and create defenses against it in case it ever appears in the body again.

Sometimes, antigens are identified as harmful by our bodies when they’re really not. This can happen with transplanted organs and in autoimmune diseases, but also in a much more common scenario: allergies. An allergen like pollen acts as an antigen, causing the immune system to kick in when it doesn’t really need to.

Blood types (A, B, AB, and O) are based on the presence or absence of specific antigens on red blood cells.

What are real-life examples of antigen?

This graphic shows an illustration of antibodies attacking an antigen—a virus. 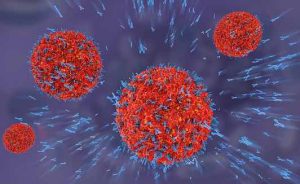 What makes this program unique is that four vaccine candidates are being tested simultaneously, each representing a unique combination of mRNA format and antigen. The design of the trial allows us to move urgently while preserving the highest quality and safety standards.

This antibody could be useful for development of antigen detection tests and serological assays targeting SARS-CoV-2, and ultimately may offer a therapeutic option against COVID-19. https://t.co/tN8qpIxxXf pic.twitter.com/PqYkco5Pkb

What other words are related to antigen?

What do antigens trigger the production of?

How to use antigen in a sentence

antigen
/ (ˈæntɪdʒən, -ˌdʒɛn) /
noun
a substance that stimulates the production of antibodies

antigen
[ ăn′tĭ-jən ]
n.
Any of various substances, including toxins, bacteria, and the cells of transplanted organs, that when introduced into the body stimulate the production of antibodies.allergen immunogen

Other words from antigen

antigen
[ ăn′tĭ-jən ]
A substance that stimulates the production of an antibody when introduced into the body. Antigens include toxins, bacteria, viruses, and other foreign substances. Compare antibody. See Note at blood type.
The American Heritage® Science Dictionary Copyright © 2011. Published by Houghton Mifflin Harcourt Publishing Company. All rights reserved.