A law that makes illegal an act that was legal when committed, increases the penalties for an infraction after it has been committed, or changes the rules of evidence to make conviction easier. The Constitution prohibits the making of ex post facto law. (See ex post facto (see also ex post facto).)

QUIZ
QUIZ YOURSELF ON "IS" VS. "ARE"
"Is" it time for a new quiz? "Are" you ready? Then prove your excellent skills on using "is" vs. "are."
Question 1 of 7
IS and ARE are both forms of which verb?
have
be
TAKE THE QUIZ TO FIND OUT

Ex post facto is a Latin phrase that literally means “from a thing done afterward” and roughly translates to “after it is done” or “after the deed.” An ex post facto law, then, is a law that in some way affects an act committed before that specific law existed (typically by condemning or punishing it).

The legality of ex post facto laws varies by country, but they are typically seen as undesirable, due to their obvious unfairness. In the United States, ex post facto laws are specifically prohibited by the Constitution, and several other countries also prohibit them.

The thought of being punished for doing something that was made illegal after you did it sounds pretty silly (and scary). The founders of the United States were apparently thinking the same thing when they wrote the Constitution, which explicitly bans criminal laws from being passed ex post facto by either the federal government (Article 1, Section 9) or the state government (Article 1, Section 10).

While the phrase ex post facto law is first recorded around the time of the writing of the U.S. Constitution in the late 1780s, the (bad) idea of creating laws to retroactively punish citizens was debated at least as far back as Ancient Rome.

A law that makes chewing gum illegal and requires the arrest of every person who has ever chewed gum, even before the law existed, would be an example of an ex post facto law. Another example would be a law that changes the punishment for reckless driving to the death penalty and requires all currently imprisoned reckless drivers to be executed.

Some of the Nazis convicted in the Nuremberg Trials argued (unsuccessfully) that the international laws they broke were ex post facto laws.

What are real-life examples for ex post facto law?

Click on the image to see the actual page of the Constitution that mentions ex post facto law. 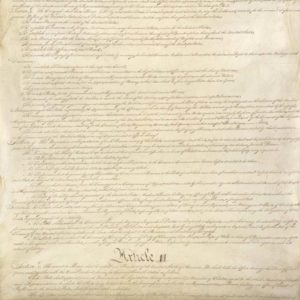 It’s sometimes a matter of debate whether a law is an ex post facto law. In real life, it might not always be so obvious.

It’s the administrative equivalent of an ex post facto law (=with retroactive effect). It would be like congress passing a law against riding a bicycle then trying to prosecute people who rode bikes as kids (before it was illegal). Can’t do it. #AbuseOfGovernmentPower https://t.co/Vj9MzOs23a

Prediction: the Supreme Court will determine that a wealth tax is essentially a retroactive income tax and is therefore an impermissible ex post facto law. At least one liberal justice will support this ruling.

What are other words related to ex post facto law?

Congress passes a law making it illegal to live on Mars. Is this an ex post facto law?

How to use ex post facto law in a sentence