or face palm or face-palm

[ feys-pahm ]
/ ˈfeɪsˌpɑm /
Slang.
Save This Word!
This shows grade level based on the word's complexity.
noun
the gesture of placing the palm of one's hand across the face, as to express embarrassment, frustration, disbelief, etc. (often used as an interjection): She read the post and comments and did a facepalm. Okay, that was dumb—facepalm!
verb (used without object)
to use this gesture to express such emotions.
QUIZ
WILL YOU SAIL OR STUMBLE ON THESE GRAMMAR QUESTIONS?
Smoothly step over to these common grammar mistakes that trip many people up. Good luck!
Question 1 of 7
Fill in the blank: I can’t figure out _____ gave me this gift.
who
whom
TAKE THE QUIZ TO FIND OUT

What does facepalm mean?

Facepalm refers to the gesture of putting one’s hand up against the face, used mainly to express feelings of stupidity and frustration about oneself or others.

Where does facepalm come from?

While the gesture is much older, the term facepalm is recorded as early as 1996. In 2001, a forum user notably posted “<facepalm>doh!<facepalm>” in mock internet markup language.

Urban Dictionary entered facepalm in 2004, indicating the slang’s spread, but the term really took off in 2008 when it was incorporated into a meme based on an image still of Captain Jean-Luc Picard (played by Patrick Stewart) facepalming in the 1990s Star Trek: The Next Generation. 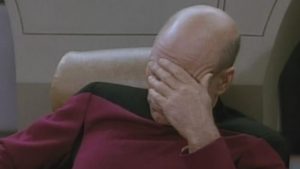 The meme, and many others like it, were used online in response to content people found unbelievably idiotic or ignorant.

Unicode 9.0 approved the person facepalming emoji, 🤦, in 2016 with subsequent skin-tone and gender modifications, letting us express our disappointment with the mere touch of a button.

How is facepalm used in real life?

Facepalming, as a gesture, term, and emoji, is used for the many situations in life—directed at ourselves or others—that make us want to hide our heads in our hands rather than face the world at that moment.

It variously conveys embarrassment, frustration, stupidity, or exasperation, often with an undertone of “I can’t believe I’m so stupid!” or a kind of sighing resignation and disbelief.

Facepalm can be a noun, modifier, or verb.

#facepalm of the day: going a specific way home just to get gas…& then forgetting to get gas. 🙄🤦🏻‍♀️

Facepalm story of the day

I audibly facepalmed when I heard that in the theater pic.twitter.com/wwrIVX0el8

Online, people use the hashtag #facepalm to comment on something ridiculous or stylize it *facepalm* to dramatize someone doing a facepalm. People also sometimes say facepalm in actual speech instead of doing the action.

Arguing that we want to do a trade deal with China like Switzerland and that any kind of CU wd mean following some SM rules for goods and constrain our ability….while ignoring the fact that the Swiss literally accept virtually the entirety of the EU acquis in goods #facepalm

What words do you use too much in your WIP?

LOOK – My characters are always "looking" at things. Although, every now and then they've been known to "make eye contact" too. *face palm*#authorconfession #amwriting #writerslife #writerproblems pic.twitter.com/rclnWjj6TJ

A double facepalm or triple facepalm intensify the feelings of stupidity or frustration.

“Me: I think I might actually like the new Star Wars movie…because my expectations will be…So…Lo… Devin: *facepalm*”

“Mr. Schuester responds to Mr. Martinez and Santana’s performance by dressing as a matador and launching into a flamenco-inspired version of ‘A Little Less Conversation.’ It’s too embarrassing to post here, so go here if you want to facepalm en espanol.”