Save This Word!
This shows grade level based on the word's complexity.
noun (used with a plural verb)Astronomy.
aurora australis.
QUIZ
GOOSES. GEESES. I WANT THIS QUIZ ON PLURAL NOUNS!
Test how much you really know about regular and irregular plural nouns with this quiz.
Question 1 of 9
Which of the following nouns has an irregular plural form?
cactus
wallet
goat
party
TAKE THE QUIZ TO FIND OUT

What are the southern lights?

The southern lights are the shimmering display of lights that sometimes appears in Earth’s Southern Hemisphere.

The phenomenon is also called aurora australis (the word australis is Latin for austral, which simply means “southern”). An aurora is a natural light display in the sky that is caused by particles from the sun interacting with Earth’s magnetic field. The aurora australis appears in many colors ranging from green and pink to red, yellow, and blue.

Auroras are not exclusive to Earth and occur on every planet in our solar system except Mercury. And the southern lights are not the only aurora on Earth. The more commonly known aurora in the Northern Hemisphere is called aurora borealis or the northern lights (the word borealis is Latin for boreal, which simply means “northern”). Both the northern and southern versions can be called aurora polaris because they occur around Earth’s poles, but this term is not commonly used.

The southern lights dazzle the many people who travel to see the natural light show, which is considered one of Earth’s most magical phenomena.

Why are the southern lights important?

If you happen to find yourself near the South Pole, you might get the chance to see a natural light display that puts any fireworks to shame. This light show is called the southern lights or aurora australis. The first records of the term southern lights come from around 1770. The name aurora australis has been used since around the mid-1700s. The term aurora borealis came earlier—it is thought to have been coined by Italian astronomer Galileo Galilei in the 1600s. The lights are named after Aurora, the Roman goddess of the dawn. The word australis means “southern.”

The southern lights are a kind of aurora, a natural light display that occurs in the skies close to Earth’s north and south poles. The process that results in an aurora starts at the sun. Because it is both very hot and very magnetic, the sun frequently releases charged particles (such as protons and electrons) into space that zip toward the planets, including Earth. Earth is surrounded by an invisible magnetic field that protects it (and us) from this solar wind by bouncing it back into space. However, the magnetic field is weakest at Earth’s north and south poles, and some solar particles manage to enter Earth’s atmosphere close to these areas and collide with Earth’s gas particles (oxygen, nitrogen, etc). These collisions emit light that the human eye can see and this, finally, results in an aurora. The southern lights are the southern aurora, and the northern aurora is called the northern lights or aurora borealis (borealis is Latin for “northern”).

While the southern lights technically appear throughout the year, the human eye isn’t always able to see them. The visibility of the southern lights depends on multiple factors such as your location, the weather, and the time of the year. Organizations such as NASA and NOAA that have studied the southern lights provide information for “aurora hunters”—people seeking to observe the lights. The southern lights can be seen in places like Antarctica, Australia, New Zealand, and the region of Argentina and Chile known as Patagonia.

Due to factors like solar wind, the southern lights don’t always appear in the same way as the northern lights.

What are real-life examples of the southern lights?

The southern lights are a spectacular display that can appear in many different colors. Some people travel just to see them. 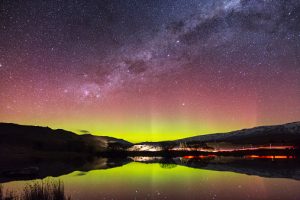 Getty. The southern lights as seen from New Zealand.

The "Southern Lights" put on a show in the night sky over Tasmania Sunday: https://t.co/VcQgP2HdBO

I pointed my camera at Antarctica and saw… Aurora Australis! (Southern Lights). Such a thrilling experience. #Patagonia #Chile pic.twitter.com/c618agYC5Z

What other words are related to southern lights?

The southern lights are caused by lightning.

How to use southern lights in a sentence