[ uh-rawr-uh, uh-rohr-uh ]
/ əˈrɔr ə, əˈroʊr ə /
Save This Word!
See synonyms for Aurora on Thesaurus.com
noun, plural au·ro·ras, au·ro·rae [uh-rawr-ee, uh-rohr-ee] /əˈrɔr i, əˈroʊr i/ for defs. 2, 3.
the ancient Roman goddess of the dawn.Compare Eos.
(lowercase) dawn.
(lowercase)Meteorology. a radiant emission from the upper atmosphere that occurs sporadically over the middle and high latitudes of both hemispheres in the form of luminous bands, streamers, or the like, caused by the bombardment of the atmosphere with charged solar particles that are being guided along the earth's magnetic lines of force.
a city in central Colorado, near Denver.
a city in NE Illinois.
a female given name.
QUIZ
WILL YOU SAIL OR STUMBLE ON THESE GRAMMAR QUESTIONS?
Smoothly step over to these common grammar mistakes that trip many people up. Good luck!
Question 1 of 7
Fill in the blank: I can’t figure out _____ gave me this gift.
who
whom
TAKE THE QUIZ TO FIND OUT

What is an aurora?

An aurora is a natural light display in the sky that is caused by particles from the sun interacting with a planet’s magnetic field.

The most well-known aurora is the aurora borealis, the shimmering display of colorful lights that sometimes appears in Earth’s Northern Hemisphere. The phenomenon is also commonly called the northern lights. The aurora that occurs in the Southern Hemisphere is called aurora australis or the southern lights. (The word borealis is Latin for boreal, which simply means “northern.” The word australis is Latin for austral, which simply means “southern.”)

On Earth, auroras appear in many colors ranging from green and pink to red, yellow, and blue. Both the northern and southern versions can be called aurora polaris because they occur around Earth’s poles, but this term is not commonly used.

Auroras are not exclusive to Earth and occur on every planet in our solar system except Mercury.

Why are auroras important?

If you happen to find yourself near the North Pole or the South Pole, you might get the chance to see a natural light display that puts any fireworks to shame. This light show is called an aurora and humans have been amazed by it for thousands of years. Recorded sightings date back to the ancient Babylonians and Assyrians, and the phenomenon may even be depicted in some ancient cave paintings. The lights are named after Aurora, the Roman goddess of the dawn. The name aurora borealis is thought to have been coined by Italian astronomer Galileo Galilei in the 1600s.

An aurora is a natural light display that occurs in the skies close to Earth’s north and south poles. The process that results in an aurora starts at the sun. Because it is both very hot and very magnetic, the sun frequently releases charged particles (such as protons and electrons) into space that zip toward the planets, including Earth. Earth is surrounded by an invisible magnetic field that protects it (and us) from this solar wind by bouncing it back into space. However, the magnetic field is weakest at Earth’s north and south poles, and some solar particles manage to enter Earth’s atmosphere close to these areas and collide with Earth’s gas particles (oxygen, nitrogen, etc). These collisions emit light that the human eye can see and this, finally, results in an aurora. The aurora borealis is the northern aurora, and the southern aurora is called the aurora australis.

While these auroras technically appear throughout the year, the human eye isn’t always able to see them. The visibility of an aurora depends on multiple factors such as your location, the weather, and the time of the year. Organizations such as NASA and NOAA that have studied auroras provide information for “aurora hunters”—people seeking to observe the lights. The aurora borealis is easiest to see during winter in cold, northern places such as Canada, Scandinavia, Greenland, Russia, and the North Pole itself, though it is sometimes visible at locations farther south. The aurora australis can be seen in places like Antarctica, Australia, New Zealand, and the region of Argentina and Chile known as Patagonia.

Like many celestial phenomena, the aurora borealis has been seen as an omen or sign of the gods by many different cultures. For example, a bright red aurora was said to have been visible in the skies prior to the death of Julius Caesar as well as the outbreaks of the American Civil War and the French Revolution. This rare “bloody” version of the northern lights was thought to signal incoming bloodshed or violence.

What are real-life examples of auroras?

The two auroras on Earth are the aurora borealis and the aurora australis—the northern lights and the southern lights. Many people travel just to see them. 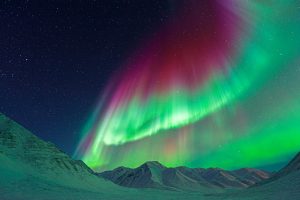 Getty. The aurora borealis as seen in Alaska.

So many questions, here are a few answers…

It was taken at the Aurora Borealis Observatory on Senja in northern Norway.

It was taken on a @SonyAlpha 7sii, which is an amazing camera for astrovideography 😍 pic.twitter.com/D7Z30sO4AP

What other words are related to aurora?

In which hemisphere does the aurora borealis appear?

How to use Aurora in a sentence

British Dictionary definitions for Aurora (1 of 3)

aurora
/ (ɔːˈrɔːrə) /
noun plural -ras or -rae (-riː)
an atmospheric phenomenon consisting of bands, curtains, or streamers of light, usually green, red, or yellow, that move across the sky in polar regions. It is caused by collisions between air molecules and charged particles from the sun that are trapped in the earth's magnetic field
poetic the dawn

British Dictionary definitions for Aurora (2 of 3)

Aurora1
/ (ɔːˈrɔːrə) /
noun
the Roman goddess of the dawnGreek counterpart: Eos
the dawn or rise of something

British Dictionary definitions for Aurora (3 of 3)

aurora
[ ə-rôr′ə ]
Plural auroras aurorae (ə-rôr′ē)
A brilliant display of bands or folds of variously colored light in the sky at night, especially in polar regions. Charged particles from the solar wind are channeled through the Earth's magnetic field into the polar regions. There the particles collide with atoms and molecules in the upper atmosphere, ionizing them and making them glow. Auroras are of greatest intensity and extent during periods of increased sunspot activity, when they often interfere with telecommunications on Earth.♦ An aurora that occurs in southern latitudes is called an aurora australis (ô-strā′lĭs) or southern lights. When it occurs in northern latitudes it is called an aurora borealis (bôr′ē-ăl′ĭs) or northern lights. See also magnetic storm.
The American Heritage® Science Dictionary Copyright © 2011. Published by Houghton Mifflin Harcourt Publishing Company. All rights reserved.