Everything After Z by Dictionary.com
Previous Word MCM
Next Word MFF

What does MF mean?

MF can stand for many things: mutual friends, Millennium Falcon, mezzo forte, mad flow, and medium frequency, to name a few. But we're pretty sure you came here for its most common meaning: motherfucker or motherfucking.

always go with your gut, 9 times outta 10 that mf right
@JerryPHD, September 2018
I FUCKING HATE GLITTER TULE CUZ IT SHEDS LIKE A MF
@shairell1, September 2018
I’m not the one to frequently drop an mf bomb, but Jackson has been known to use language of that ilk and he recently spoke out to relate his story about overcoming stuttering at the American Institute for Stuttering gala.
Jessica Rawden, Cinema Blend, June 2013 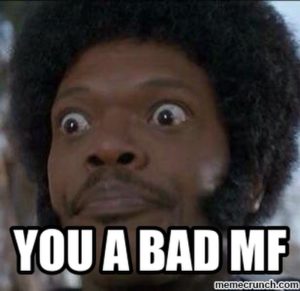 Where does MF come from?

MF comes from one of the strongest swears in the English language: motherfucker. Motherfucking is found in the 1880s, and motherfucker, for a “vile, worthless person,” in the 1910s.

In the 1950s, motherfucker, showing the flip from bad to good seen in many swear words, came to mean “badass.” Motherfucking also became a general intensifier, e.g., That’s motherfucking awesome.

In 1970, a Jet article printed M.F. in a report about how Georgia legislator and civil rights leader Julian Bond called Vice President Spiro Agnew a “Maryland Farmer.” This is a euphemism—which we are most definitely adopting—for motherfucker based on its initials, MF.

If anyone wasn’t already aware that MF was a cleaner way to say or print motherfucker, Prince’s 1992 hit “Sexy M.F.” filled them in. RIP, you sexy MF, Prince.

The internet and social media, ever the environment for shorthands and workarounds, helped spread MF in the 1990–2000s.

MF can stand in for all your MF needs, e.g., a motherfucker or the modifier motherfucking. MF’er, for motherfucker, is a variant, as is MF‘ing.

In the digital age, you’ll likely see MF online for people either trying to save a little time in their swearing or avoid the outright force of motherfucker. People may also use MF for some self-censorship in speech.

I’ve learned you definitely just have to let mf’s talk , you don’t have to sit around & listen to that shit But you just gotta let mf’s talk

You can’t say motherfucker on broadcast TV in the US and a lot of print outlets won’t publish it, so MF is a commonly used substitute by media sources from Fox News to Mother Jones when reporting.

Indian film star Priyanka Chopra sparked some controversy in 2017 when she called her ex-boyfriend a MF. As if most of us haven’t called our exes worse. Double standards, folks. And Steve, if you’re reading this, I want my grey hoodie back, you MF‘ing chode.

Hip-hop artist Shotgun Wang inspired a meme with his 2017 track “I Keep That MF Thang On Me.” The MF in the track is a shoutout to its producer, MF Doom, whose MF stands for metal force, metal fingers, and even mad flow. But we’re pretty sure they are both taking advantage of MF‘s other association. The meme featured people carrying unexpected things in their pockets.

you know i keep that mf thang on me !! pic.twitter.com/TUA4dtuz8n

you know I keep that mf thang on me pic.twitter.com/P6OkinJe5C

This is not meant to be a formal definition of MF like most terms we define on Dictionary.com, but is rather an informal word summary that hopefully touches upon the key aspects of the meaning and usage of MF that will help our users expand their word mastery.