If you’re looking to extend your popularity by showing how you’re buddy-buddy with someone cool or just want to feel the love from a friend, you might tell them to PMOYS.

Where does PMOYS come from? 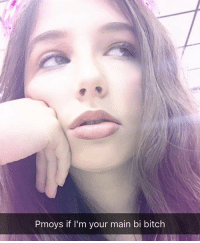 PMOYS is primarily used on used on Snapchat, a social-media app around since 2011, though its Stories feature—a kind of curated collection of moments, or Snaps—didn’t launch until 2013. It typically involves one friend sending some kind of picture to another along with the text PMOYS.

Before Snapchat, PMOY(s) was (and is) used as an acronym for Playboy magazine’s so-called Playmate(s) of the Year.

2016 is when PMOYS takes off in the Snapchat lexicon, corresponding to its viral spread on Twitter. By the end of the year, it had become so widely used that, as with so much of internet content, people were already sick of it. Really sick of it.

Played out or not, PMOYS continues, put on Urban Dictionary’s story in 2017. Some people began to use PMOYS to promote their content, such as a new album.

"Add me on snap pmoys" no thank you 😂
@Jazmin_Vazquez_, September, 2016
some people can make some creative ass “pmoys” slideshows, but when it comes to powerpoint presentations y’all leave most of your slides blank 💀
@rebekvhcarter, September, 2018 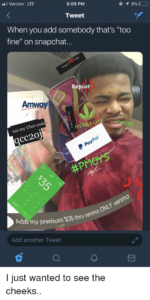 Sometimes, PMOYS is used in a friend request (i.e., add me as a friend on Snapchat), though AMOS (add me on Snapchat) is more common.

Most of the time, PMOYS is a request for someone to put a picture of them, often as appearing with the requested friend, as a way to prove that they are friends. All for that social cred.

PMOY, typically without the S, still sees some use as a shorthand for Playboy‘s Playmate of the Year.

This is not meant to be a formal definition of PMOYS like most terms we define on Dictionary.com, but is rather an informal word summary that hopefully touches upon the key aspects of the meaning and usage of PMOYS that will help our users expand their word mastery.