What does 🍺 Beer Mug emoji mean?

The Beer Mug emoji 🍺 depicts a mug full of frosty beer. It is commonly used to represent beer and other alcoholic beverages, bars, night clubs, parties, drunkenness, and good times.

It overlaps in usage with the Clinking Beer Mugs emoji 🍻, and both emoji are likely to be used for International Beer Day, which occurs on the first Friday in August (August 6 in 2021), as well as for celebrations of Oktoberfest in Germany and throughout the world.

If you’re going out for a drink, know what to order thanks to this explainer on different types of beer and their origins.

Where does 🍺 Beer Mug Emoji come from? 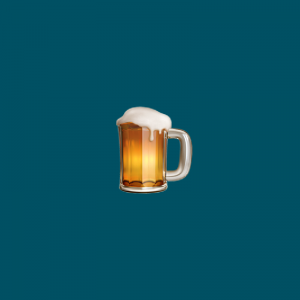 The Beer Mug emoji 🍺 was approved under Unicode 6.0 in 2010. On most major platforms, the emoji depicts a glass mug filled with foamy golden-brown beer spilling over the top. The mug’s handle is on the left on WhatsApp, but all other major platforms depict the handle on the right. Depending on the platform, the emoji may be realistic or stylized.

The Beer Mug emoji 🍺 is a popular emoji that is used to refer to beer, alcoholic beverages, and occasions where people are likely to drink beer.

That’s presents and breakfasts finally done ✅ I can have a beer now right?! 🍺

This is not meant to be a formal definition of 🍺 Beer Mug Emoji like most terms we define on Dictionary.com, but is rather an informal word summary that hopefully touches upon the key aspects of the meaning and usage of 🍺 Beer Mug Emoji that will help our users expand their word mastery.