What does hold my beer mean?

Where does hold my beer come from? 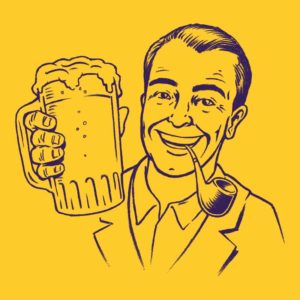 Being intoxicated from alcohol can make us humans do … not the wisest of things, shall we say. And so we have the hold my beer. If someone says hold my beer, as the joke goes, and then hands you their drink, watch out! They may be about to do a reckless stunt or challenge.

Nothing good ever follows these three words. "HOLD MY BEER"

Hold my beer has appeared as a punchline to self-styled “redneck” or Southern jokes: “What is a redneck’s last words? Hold my beer and watch this.” Evidence for this phrase can be found online in the 1990s, and is associated with the stand-up comedy of Jeff Foxworthy.

If your buddy says,"hold my beer and watch this," go ahead and drink it. You probably won't be seeing him the rest of the night.

The phrase hold my beer spread on the internet in the early 2010s, often commenting on “fail” videos. These feature people attempting to pull off a dare but messing up spectacularly. 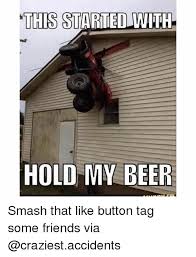 Hold my beer spread further on social media in 2016–17. People used the phrase hold my beer to characterize major events of the day (e.g., the election of Donald Trump, Brexit, tone-deaf marketing such as the Kendall Jenner Pepsi ad) as stupid, destructive behavior.

BRITAIN: Brexit is the stupidest, most self-destructive act a country could undertake.
USA: Hold my beer.

Examples of hold my beer

Hold my beer while I kick this off my friends head.
@holdmyale, November 2019
“Hold my beer” — as in, what a college kid might say before he attempts a magnificently stupid stunt — is a joke made for this era.
Madison Malone Kircher, New York, April 2017

Who uses hold my beer?

The phrase hold my beer is synonymous with doing ill-advised acts or making poor decisions.

On social media, as noted, hold my beer often appears in fictional dialogues where users imagine one person or entity one-upping the bad judgment or unwise behavior or another.

Pepsi: That was the biggest PR blunder of the week, year maybe.

This is not meant to be a formal definition of hold my beer like most terms we define on Dictionary.com, but is rather an informal word summary that hopefully touches upon the key aspects of the meaning and usage of hold my beer that will help our users expand their word mastery.