We may have endless questions about space, but at least you can learn the difference between meteors, meteorites, and meteoroids here.

Where does 👨‍🚀 Man Astronaut emoji come from? 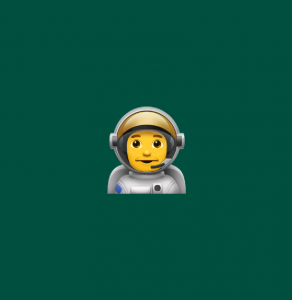 The Man Astronaut emoji 👨‍🚀 is used generally to refer to outer space. In this sense, it is often used alongside the many other space-related emoji such as the Rocket emoji 🚀, the Alien emoji 👽, the Ringed Planet emoji 🪐, the Satellite emoji 🛰️, and the Telescope emoji 🔭.

The Man Astronaut emoji 👨‍🚀 is used to refer to actual astronauts, NASA, and space exploration.

#HappyBirthday to Russian cosmonaut and veteran of two space missions, Sergei Zalyotin. In 2000, he was a member of the final resident crew aboard the Mir space station. 👨‍🚀🎂

This past week @NASA flew a helicopter around Mars, made breathable air from Mars’s atmosphere, and @SpaceX flew astronauts to the space station on a recycled rocket.

Interesting fact: Neil Armstrong was the first person to land on the moon. “Neil A” spelled backwards is “Alien”. 👽👨‍🚀🤯

The Man Astronaut emoji 👨‍🚀 is also used generally to refer to outer space, both in real life and as depicted in popular culture.

Late night thought- what if corona virus is an alien species from a different planet trying to colonize Earth and use our resources? 🤔👽🛸🚀👨‍🚀 🌎🪐🦠

A friend told me today, “Look, think of this lockdown thing as like astronaut training.” 👨‍🚀 We’re going to Mars in house-shaped spaceships. It’ll take months to get there, and if you go outside the ship, you’ll die. Be strong! Forgive each other’s foibles. Think of the mission!