The Prayer Beads emoji 📿 depicts a string of beads. It is commonly used to represent prayer beads of multiple religions and the act of prayer. Sometimes, it may also be used to refer to non-religious jewelry.

Everyone knows most prayers culminate with an “Amen.” But have you thought about what the word actually means? Learn more here.

Where does 📿 Prayer Beads emoji come from? 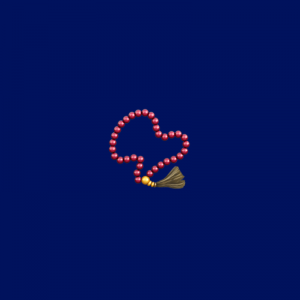 The Prayer Beads emoji 📿 was approved under Unicode 8.0 in 2015. On most major platforms, the emoji depicts a string of beads with a golden center bead adorned with a tassel. On mast platforms the beads are red. The beads are red and brown in the Microsoft version, brown in the WhatsApp version, and purple in the Twitter version. The color of the tassel varies by platform, and the string of beads may appear realistic or stylized.

Please pray for me, I have to drive to another state with my foolish siblings 📿 🙏
@AltChubbs, March 5, 2020
Coronavirus, locusts attack, cyclone, flood, earthquake. God is very angry. Prayers for all. 🙏 📿
@SalmanNizami_, May 29, 2020

The Prayer Beads emoji 📿 is used to refer to prayer and piety.

They can’t stop you from praying the rosary every day 📿

The devil is up early today. Thank God I was up earlier armed with prayer. 📿🙏