What does ⏱️ Stopwatch emoji mean?

The stopwatch emoji depicts a silver stopwatch, which is used to time something, such as a race ... you know, before we had them on phones.

They all have faces like a clock (with markers for 60 seconds making up the face) as opposed to a digital design. This emoji is mostly used in posts about time.

Where does ⏱️ Stopwatch emoji come from? 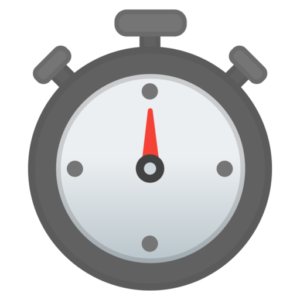 The stopwatch emoji was approved as part of Unicode 6.0 in 2010 and added to Emoji 1.0 in 2015. Apple’s version is a fairly realistic illustration that almost looks like a photo.

The stopwatch emoji gets a workout in the sports world on social media, especially when it relates to plays where the clock is running out and the game has been won, or to the impressive speed of an athlete. So, the stopwatch can sometimes be equated to the idea of victory. Other times, it relates to sleep, to being late, to waiting and being patient (or impatient), and other things that involve time.

🎥 That was quick… ⏱️ pic.twitter.com/yilFLZUtD9

Sometimes, the stopwatch emoji is used to convey some deeper philosophical message:

A post shared by VíŗáŞĥůśĥĕřébä_PįŅŧĘřĘŝŤ❤️ (@virashushereba_pinterest) on Oct 21, 2018 at 1:56am PDT

This is not meant to be a formal definition of ⏱️ Stopwatch emoji like most terms we define on Dictionary.com, but is rather an informal word summary that hopefully touches upon the key aspects of the meaning and usage of ⏱️ Stopwatch emoji that will help our users expand their word mastery.