What does 🛸 UFO emoji mean?

The UFO emoji 🛸 portrays a flying saucer, a common depiction of an alien spaceship. The term UFO stands for “unidentified flying object.” The UFO emoji 🛸 is often used to refer to outer space, spacecrafts, space aliens, or conspiracy theories. On July 2, the UFO emoji 🛸 is used with the hashtag #WorldUFODay to commemorate World UFO Day.

Where does 🛸 UFO emoji come from? 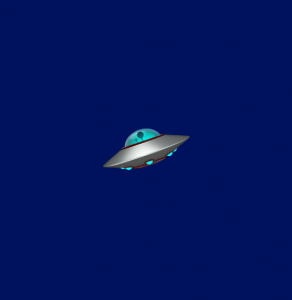 The UFO emoji 🛸 was approved under Unicode 10.0 in 2017 as Flying Saucer. On most major platforms, the emoji resembles an alien spacecraft in the shape of a gray disc topped with a glass-covered cockpit. The Apple and Microsoft versions of the emoji depict a space alien piloting the ship. The Google, Samsung, Twitter, and Facebook versions of the emoji have the bottom of the ship emitting a tractor beam.

UFOs, also often referred to as flying saucers, are commonly depicted in popular culture as the spacecraft used by aliens from outer space. For this reason, the UFO emoji 🛸 is often used with the Alien emoji 👽 to discuss fictional space aliens or to question their existence in real life. More generally, the UFO emoji 🛸 is used with other outer space-themed emoji, such as the Rocket emoji 🚀 or the Ringed Planet emoji 🪐, to discuss outer space or astronomy.

The term UFO dates back to the 1950s, when aviator Daniel Keyhoe used it in a book. In May 2021, the UFO emoji 🛸 saw increased usage on social media after it was revealed that the United States government was completing a report on “unidentified aerial phenomena.” While government officials avoided providing more details, some in the media and the public concluded that the government was investigating the existence of alien spacecraft.

Now the government announcing that ufos 🛸 are real 🥴

The government saying 🛸 real now they must have one

The UFO emoji 🛸 is often used in both lighthearted and serious discussions of space aliens.

I love all this alien n ufo talk lately. 👽 🛸

Obviously the aliens at Area 51 are to blame for these blown motors 🛸 no other explanation.

The UFO emoji 🛸 is also used to refer to outer space in general.

Yesterday, the moon🌚🌝 was enormous. I thought I was in outer space👽🚀🛸

The UFO emoji 🛸 can also refer to conspiracy theories.

This is not meant to be a formal definition of 🛸 UFO emoji like most terms we define on Dictionary.com, but is rather an informal word summary that hopefully touches upon the key aspects of the meaning and usage of 🛸 UFO emoji that will help our users expand their word mastery.