What does Greta Thunberg mean?

Greta Thunberg is an influential teenaged climate activist from Sweden. She came to prominence for her climate strikes in 2018 and major speeches in 2019.

Where does Greta Thunberg come from? 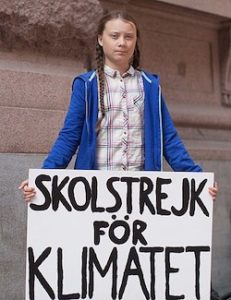 In August 2018, a 15-year-old Greta Thunberg began as a solo protest against climate change and environmental destruction in her native Sweden. Choosing not to attend school, she stationed herself outside the Swedish parliament for several weeks in Stockholm, holding a sign that read, in Swedish: “Skolstrejk för klimatet” (“School strike for climate”).

Thunberg’s protest—which became known, after her sign, school strikes for climate—won the attention and mobilized the activism of many people around the globe. Her platform demands immediate changes to the use of fossil fuels to preserve the planet for future generations, and her speeches directly confront international inaction on the climate crisis and mass extinction.

One year later in August 2019, Thunberg sailed across the Atlantic on a carbon-neutral boat, highlighting the importance of reducing reliance on fossil fuels, to the US. When she arrived, she addressed the US Congress, the New York rally of the Global Climate Strike (which she inspired), and the UN Climate Action Summit.

TIME magazine named Greta Thunberg their 2019 Person of the Year.

Greta Thunberg isn't a viral sensation just because she's great at Twitter. She's building off an activism strategy first developed in the 1960s
@WIRED, September 2019
Greta Thunberg is intentionally and profoundly inspiring, and a great example of the kind of policies and leaders we should look up to and live by.
@honeydrippers, September 2019
Thunberg has done more than any other human being on our ailing planet to bring a particular argument of existential importance—an argument far more difficult to accept than a mere demand for “climate action”—before the masses for our consideration. And we aren’t really listening.
Osita Nwanevu, The New Republic,September 2019
SEE MORE EXAMPLES

In addition to raising the profile of the climate crisis and inspiring people, especially young people through social media, to take action like never before, Thunberg has been named a leader by Time and was nominated for the 2019 Nobel Peace Prize.

TIME's new cover: ‘Now I am speaking to the whole world.’ How teen climate activist Greta Thunberg got everyone to listen https://t.co/cnQsN5gElW pic.twitter.com/0eeDfhjMG2

While widely praised, Thunberg has also been mocked online and in some media for her mannerisms (she is on the autism spectrum) and dismissed as an overly serious, uninformed, privileged young girl. Thunberg has also inspired a number of memes, some celebrating her, others mocking her.

It's worth remembering that there are perfectly legitimate reasons for being suspicious of Greta Thunberg. For example the fact that you're a great big stupid man-baby, tricked by an algorithm into taking your opinions from corporate power.

This is not meant to be a formal definition of Greta Thunberg like most terms we define on Dictionary.com, but is rather an informal word summary that hopefully touches upon the key aspects of the meaning and usage of Greta Thunberg that will help our users expand their word mastery.