What does plogging mean?

Plogging lets you and the Earth get fitter at the same time. It’s a win-win! Plogging is a Swedish exercise trend that combines jogging with picking up litter.

Where does plogging come from? 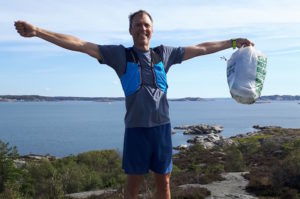 The word plogging is an English-Swedish combination of jogging and plocka upp, which means “pick up” in Swedish. Swedish speakers use plogga, a combination of plocka upp with jogga (“jog”). Both words, though, refer to the same activity of picking up litter while out on a jog.

I'm showing mom the beauty of #plogga 🌲♻️…so much easier and funnier with a "claw" from @biltemasverige 🦀🔝In only 4k, we filled two bags with cigarette butts (hundreds!), plastics, cans, styrofoam…all things that don't belong in our nature!🚯 Mom's retiring now and has made a promise to keep this trail clean…hero! 💚 Please, let's clean up this mess together 🐜🌍🦋❤️🌳 @hallsverigerent #plogging #ettskräpomdagen #ileavenothingbutfootprints #hållsverigerent #mora

Plogging was invented by Swedish outdoorsman and environmentalist Erik Ahlström. In 2017, he founded Plogga, an organization that encourages plogging and other environmental fitness activities, in April 2017 , though it’s reported he engaged in plogging in 2016.

Plogging started small but quickly started to gain attention in Sweden thanks to Ahlström’s efforts and, especially, social media. Plogging/plogga videos started appearing on YouTube in 2017, and plogging posts were being shared by Swedes on Instagram, Twitter, Reddit, and other social sites.

Plogging did gain some exposure on English-language social media in 2017 (it was noted as a new word in Swedish media that year), but the spread internationally in 2018. For instance,  The Washington Post featured an article on plogging in February 2018, and other major publishers from a variety of countries also covered plogging throughout 2018.

"My #PromiseForThePlanet is plogging, which is simply picking up litter when you jog. It's surprising how much you can find – this was from just 10 minutes of plogging!" What a brilliant promise from our supporter Maggie! Who else has started #plogging? 🏃 pic.twitter.com/WamTNK2Hw2

The plogging may have gained further traction because—like the trashtag trend the following year—people 1) liked that the activity is purely good; 2) enjoyed sharing posts of themselves doing good for the environment; and 3) are interested in Swedish lifestyle words and trends (e.g., death cleaning).

#Plogging is really nothing more than going for a run and picking up trash, but if a cool word and Instagram feeds help encourage more people to ‘plog’, then so be it. https://t.co/OdNsUo2cye

The verb form of plogging is to plog and the agent noun, plogger. And, a plog is the plogging equivalent of a jog.

Well I guess I’m a plogger. I carry trash bags and pick up your trash, you litterbugs. 😋 I just thought of it as multitasking. https://t.co/BBA41YZDjf

While it isn’t trending in the news as it was in 2018, plogging endures as an activity, especially among green-minded fitness aficionados.

Some may use plogging and the Swedish plogga interchangeably.

#plasticpollution is everywhere. What if each one of us picked up just one piece of litter everyday? #plog #plogga #plogging #trashtag pic.twitter.com/ChMVGKxyXO

Occasionally, but use an unrelated plogging as a blend word of photograph(y) and blogging.

This is not meant to be a formal definition of plogging like most terms we define on Dictionary.com, but is rather an informal word summary that hopefully touches upon the key aspects of the meaning and usage of plogging that will help our users expand their word mastery.