What is Rosa Parks Day?

Rosa Parks Day is a holiday in celebration of the life and achievements of Civil Rights activist Rosa Parks.

Rosa Parks is widely considered one of the icons of the Civil Rights movement in the U.S. She is remembered for her act of protest that involved refusing to give up her seat to white passengers on a bus, but she became a leader in the movement.

Rosa Parks Day is celebrated in several states, including California, Ohio, Alabama, Missouri, Oregon, and Tennessee. There have been proposals for the day to be made into a federal holiday.

Where does Rosa Parks Day come from? 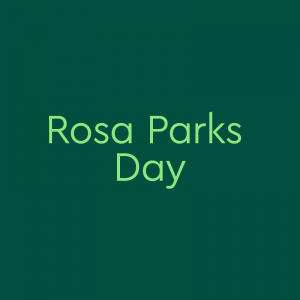 On December 1, 1955, Rosa Parks was seated on a bus in Montgomery, Alabama, when the driver demanded that she move to make room for white passengers—a common practice at the time supported by racist segregation laws. Parks refused and was arrested. Her act of protest sparked the Montgomery Bus Boycott, considered a turning point in the Civil Rights Movement. Parks continued to be a leader for Civil Rights. The Supreme Court eventually declared that segregation on public buses was unconstitutional.

Adoption of a holiday known as Rosa Parks Day began in the early 2000s. It was first observed in California in 2000. It was first officially recognized in Ohio in 2005.

It’s Rosa Parks day!! It’s been 65 years since she stood her ground y’all. That’s as old as some of y’all’s grandparents and I’d like to remind you that that didn’t happen too long ago.
@bootwtbrainrot, December 1, 2020
When faced with injustice, Rosa Parks refused to move and ignited a movement. On Rosa Parks Day, we remind ourselves that the path to equality and racial justice is long and winding, but we must never give up—no matter what.
@SenDuckworth, February 4, 2021
Three Congresspeople have joined forces to introduce a bill that would make Rosa Parks Day a nationwide federal holiday. Rep. Jim Cooper (Tennessee), Congressional Black Caucus Chair Rep. Joyce Beatty (Ohio), and Rep. Terri Sewell (Alabama) introduced the Rosa Parks Day Act on Aug. 30. The bill would honor the late civil rights leader Rosa Parks by designating a new federal holiday on Dec. 1.
Jeroslyn Johnson, Black Enterprise, October 5, 2021
SEE MORE EXAMPLES

What are other words used in discussion of Rosa Parks Day?

This is not meant to be a formal definition of Rosa Parks Day like most terms we define on Dictionary.com, but is rather an informal word summary that hopefully touches upon the key aspects of the meaning and usage of Rosa Parks Day that will help our users expand their word mastery.